Fake news is a symptom, not a disease

Government – in this case, the Ministry of Information and Broadcasting (I&B) is planning to bring in regulations to penalize Fake News peddlers. As expected there is a huge hue and cry among mainstream media [MSM] journalists that their freedom of expression will be curtailed. There is a clarification that it will apply to mainly “accredited” journalists and media and not to all. PM Modi seems to have nixed the idea by suggesting Press Council of India [PCI] should look into the issue of Fake News. But the track record of PCI has not been filled with glory.

Interestingly none of the well-known journalists like Shekar Gupta/ Rajdeep Sardesai/ Barkha Dutt/ Prannoy Roy/ N Ram etc. are not in the list. Maybe government goes to provide news to them rather than they coming to Government to get any news.

There is an age-old idea of “accredited” journalist by Press Information Bureau [PIB] which gives these journalists access to Government offices/ Press conferences etc. Not only that they also have monetary benefits in case of accidents/death etc.

Last count there were 2404 in 2018 starting with A Vaidyanathan of NDTV to Zakir Mallik of NSD AIR. It is not only Correspondents but also Cameraman/ Technicians and an interesting category called ”Long and Distinguished” –whatever it means.

Interestingly none of the well-known journalists like Shekar Gupta/ Rajdeep Sardesai/ Barkha Dutt/ Prannoy Roy/ N Ram etc. are not on the list. Maybe government goes to provide news to them rather than they coming to Government to get any news!

Other than this there is Editor List of 140 starting from Aashish Joshi of LS TV to William Spindle of WSJ. Many major journals like NYT or Economist are not present.

For PIB Delhi based journalist the criteria are

In the case of requests for admission of daily Newspapers to Lok Sabha Press Gallery, the following criteria shall be followed:

Now the time has come for PIB to re-consider this whole issue of accreditation and fringe benefits to select few. It also depends on the fact if the media is tilted towards Government or against it

This can be decided without the concept of “accreditation” based on the circulation /viewership etc.

To provide one-time ex-gratia relief on an urgent basis to journalists and their families. A journalist for the purpose of this scheme would mean, (i) a working journalist as defined under the Working Journalists and other Newspaper employees (Condition of Service) and Miscellaneous Provisions Act, 1955, or (ii) “Media Personnel” whose principal avocation is that of reporting/ editing for news channels of radio, TV or web based services and who is employed as such, either whole-time or part-time, in or in relation to, one or more such establishments and includes news editor, reporter, photographer, cameraman, photo journalist, freelance journalists, but does not include any such person who —
a) is employed mainly in a managerial or administrative capacity, or

b) is being employed in a supervisory capacity, performs, either by the nature of the duties attached to his office or by reason of the powers vested in him, function mainly of a managerial nature. Family for the purpose of this Scheme will mean the journalist, spouse, dependent parents and dependent children.

However, in case of non-accredited journalists, the quantum of assistance available for cases (iii), (iv) and (v) above will be limited to Rupees One Lakh for journalists have worked as such for five continuous years and thereafter Rupees One Lakh for every additional five years of working in the same manner subject to the maximum ceiling provided in each case.

Many of the journalist accredited to State Government are having additional benefits like land allotment or flat allotment etc.

Again with the advent of so many Insurance schemes under various Companies and Govt. –these can be easily accommodated without elaborate procedures of PIB

There has been a sea change in the last decade in terms of generation and consumption of news. The traditional print media is losing its importance in the context of 24-hour news channels and other alternative media like net-based news and twitter etc.

There is a huge fall in the sales of the MSM print media and correspondingly their advertisement revenues. Also, a large number of TV channels have come about to provide continuous news unlike in the past when one has to depend only on Doordarshan news.

Now the time has come for PIB to re-consider this whole issue of accreditation and fringe benefits to select few. It also depends on the fact if the media is tilted towards Government or against it.

In many instances, Media is openly propagating against the sovereignty of the country Many Tamil channels can be cited as examples. In small towns etc. journalists some time blackmail local college/ industry/ hospital etc. to extract money threatening bad news on them.

What is needed at present- is a very good monitoring mechanism against #BreakingIndia forces and the abolition of this so-called accreditation process. Both at the central level and at regional level public should be involved –eminent citizens—in monitoring the content of TV and Print media mainly to monitor news/views threatening the integrity of India. That is the need of the hour. Fake news is a symptom, not a disease. 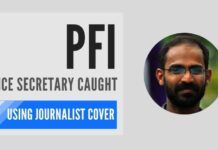 Elders may frown but Modi still has the upper hand