Colonial powers do not give up their colonies without mischief—particularly powers like Britain. During their rule, they actively encouraged and sometimes funded two dangerous trends to keep their power. The two seeds they sowed have debilitated India. They are Jinnah and his two nation theory and EVR and his Aryan/Dravidian theory based on bogus history.

The seed of Jinnah grew into a big tree called Pakistan. Interestingly many Ahmedias [or Qadiani are pejoratively called in Pakistan] actively sided with Jinnah. Alas! They are not considered as True Muslims in Pakistan today. That is how Karma acts.The other seed was EVR and his notion of Dravidastan. This whole idea was that of South Indian Liberal Federation of 1916. It primarily consisted of Telugu feudal landlords who went out of the way to support British rule.

They opposed Annie Besant /Mahatma Gandhi etc. Their claim was to represent Dravidians as opposed to Aryan Brahmins—who by some Marxist historians have migrated or invaded India from Europe.

Although it professed to represent all non-Brahmins, the Justice Party eventually lost the support of Muslims and SC’s, who accused it of serving the interests of only a few castes like Vellalars (Mudaliars, Pillais), Balija Naidus, Beri Chettis, Kapus and Kammas.

They ruled the Madras Presidency from 1920 till 1937 under different permutations till Congress came to power. It got renamed as Justice Party which was captured by E.V Ramasamy [Naikar] who made it in to a social movement not participating in polls.

EVR was a stooge of the British and totally opposed freedom movement. He even requested /begged British not to leave India. He wanted his ‘Dravidastan’ to be a separate country or merged with Pakistan. But Jinnah was not enthusiastic.

EVR declared 15th August 1947 as a mourning day. It is still a mystery why he was not arrested at that time under Defense of India Act— may be due to British pressure on the new Government. He married his adopted daughter when he was in his seventies and she in twenties. His chela Annadurai parted company with him to participate in electoral politics.

The idea that the southern part of India is a separate entity conquered by the Aryan invaders was preposterous and based on the fiction of Aryan Invasion Theory or AIT which has been proved wrong by historians/archaeologists and recently by geneticists. Incidentally, Ambedkar disputed various hypotheses of the Aryan homeland being outside India and concluded the Aryan homeland was India itself.

In 1956 Potti Sriramulu of Andhra went on a fast unto death to get a separate Andhra state based on Telugu language. That really impacted the Dravidian folks since language based states got created and the Dravidian idea was within Tamilnad only. That time many saner leaders including Ambedkar were not enthusiastic about language based states. Ironically the same Andhra Pradesh got divided into two states recently disproving that, language alone is great unifier.

The Dravidian poisonous seed was ignored by Nehru clan which ruled India for nearly 50 years.

When the DMK under Annadurai captured power in 1967 the then Congress Chief Minister Bakthavatsalam famously and accurately told that poisonous virus is spreading.

The political class in Tamil Nadu played this Dravidian song ably assisted by print and film media. Much later TV and other media. The main theme song was that Tamils are separate race and so it needs to have separate identity and maybe land. The Sri Lankan LTTE revolt assisted by Church and European powers was also used to make the song louder.

Anyhow the time has come to squarely face these Dravidian frauds and expose them.

This original seed has grown into cactus of different form. Today one section of the EVR chickens or followers claim Tamils are not Hindus and say that other than Muruga or Lord Subramanya all other gods are imposed from North.

The poisonous seed has grown into a big tree and many are jumping into it without realizing the impact on unity and integrity of India.

One section of semi-literate economists are propagating that South is contributing and north is just consuming. There are going to be many articles by eminent “economists how the south is “cheated” by north. They neither know history nor geography. They know not how much freight equalization has impacted states like WB/Bihar/MP/Chhattisgarh etc. since, without freight equalization, all factories would have started there only. They know not about Credit/Deposit ratio of Banks where the deposits of so-called northern states are used by western and southern states to industrialize. They are ignorant about the fact that many PSUs in the fifties and sixties were deliberately located in places like Bangalore/Madras/Hyderabad due to freight equalization schemes.

Anyhow the time has come to squarely face these Dravidian frauds and expose them. One section of the tip of tongue English speaking elites of south are instigating it. P.Chidambaram and Tharoor will soon jump into this.

Congress under Sonia has realized that using Caste and regionalism will be primary ways to capture power. So create chaos using Patels in Gujarat/Yadavs in UP/Rajputs in Rajasthan/MP/Lingayats in Karnataka. Etc. Over and above encourage regional feelings to create a separate flag for Karnataka – the only state having that is J&K now.

Chandra Babu has jumped into this north-south divide. Already Pavan Kalyan in AP and Kamal Hasan and assorted forces in TN are into this. These politicians who encourage divisiveness are only concerned about next election and how to make money.

We should create an atmosphere of the unity of castes and commonality of north and south. From the eighties, this author is arguing for a 2-year compulsory Military training for all school finished Indians and exchange of students of one state into another for at least one year.

Unfortunately, our HRD ministries have failed in integrating India. Coupled with that large number of TV channels are propagating divisive ideology. For instance, BBC is known to be infested with Pro-Pakistan journalists etc. They are given permission in many Indian languages to have channels. Many print media channels in the fifties and sixties encouraged divisive trends in TN and now the task is done by TV channels.

Nationalist forces do not seem to have a clue to deal with this and 2019 will be battle on castes and this regional chauvinism.

Two things must be done by nationalists immediately. One is going all out to propagate that north is not inimical to the south. There has been tremendous unity based on culture and religion. Many southern sampradayas were encouraged and influenced by northern sampradayas. Same way north was influenced by Sankaracharya/Ramanujacharya and Madhwacharya.

Bakthi movement of Chaitanya/ Sankardeva/Alwars/Nayanmars have a unified thread and need to highlight it. From Nepal Pasupathinath temple to Amarnath many southern pundits were invited and involved.

Also in the south, Hinduism will be attacked by so-called modernism. In the metros of the south, the rootless wonders will be the main palanquin bearers of this attack. They would like to encourage “modernism” as opposed to backward Hinduism of “cow belt”. Modernism as defined in terms of pub culture/illicit relationships and unwed mothers. Fornication is a new religion. If you do not know your father all the better. Interestingly the entertainment world has more such “modern” people and TN is fully obsessed about the entertainment business.

The TV media will be full with “divisionism” with The Hindu/Scroll/Print etc. fully supporting it based on #Breakindiaideology. Media like ToI/HT etc. will go for TRP and business.

Another major task of nationalists is to recognize caste as social capital and celebrate it instead of abusing it based on Church Propaganda. Plenty of Chettiars/Lingayats/Gounders have constructed lots of choultries in Kashi to Badrinath and need to rejuvenate it to bring backlinks. Muthuswami Dikshatar stayed at Kashi and renew his home.

Time has come to explore the organic link between different OBC castes in India based on Hindu sampradayas. Go back to Ramayana and Mahabharata to find the common tradition of Nadars/Gounders/Vokkaligas/Rajputs/Yadavs/Jats etc.

The fight is long drawn out. Southern Modernism will destroy India. For example, I am always asked by Southern friends-“ how you manage to keep Vibhuti and be seen in all meetings /board etc.” Mark the word “manage”—We have reached a situation where within India I need to “manage” having Vibhuti—

Are the nationalist listening and ready for the Kurukshetra or second war of independence in 2019? 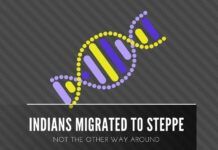 Aryan Dravidian divide – Why it is incorrect & inappropriate for TV

India’s military spending may sound impressive, but it is not in...