China is developing a $1.4 billion port city near the Sri Lanka port of Colombo. It is formed as a sand-dune-based artificial island in the sea. This is a terrific project to create a separate landscape outside the map of Sri Lanka. It can be said that it is an attempt to change the map of Sri Lanka. But the Sri Lanka government says that it is a special economic zone to attract Foreign Direct Investment.[1]

The bill was passed by the Sri Lanka Parliament on May 20. The name of the bill is Colombo Port City Economic Commission Bill[2]. Sri Lanka’s leading political commentator Nilanthan Niruthan describes the dangerous content of the commission bill. According to him:

That is why former Sri Lanka President Chandrika Kumaratunga is worried that “Sri Lanka is becoming a colony of China[3].”

M A Sumanthiran, a Tamil National Alliance (TNA) MP and senior lawyer said, “Sri Lanka has lost its territory to China. You have talked a lot about Eelam. Now you are creating a mess. That is to say, you are creating Chinese Eelam.[4]

What we now suspect is that China could have implemented a special economic zone within the city of Colombo. But why would China think of creating a separate island in the middle of the ocean and operate it from land that is not on the map? Probably because if the map operates within the territory, it will have to be included as being part of Sri Lanka. When remaining off the map – is it possible to get the freedom to stay outside of Sri Lankan law?

Up to 12 km from the low tide stretch of any country falls within its jurisdiction. The area beyond that is international water. Now that an artificial island is being created in Sri Lankan water, it would effectively push out the international waters of Sri Lanka. It is suspected that China and Sri Lanka are jointly involved in a conspiracy to expand land and water in violation of international norms.

Is it dangerous for India?

With this project being carried out by China, the risk to India has increased. About 70 per cent of India’s container traffic passes through the port of Colombo. The formation of a Chinese port city in the vicinity of the Kudankulam nuclear power plant in this area – within the Indian Ocean – has created an extraordinary situation. This is a sign that China has settled in India’s backyard.

Colonel Hariharan, an outstanding expert in strategy class affairs, presents some important points. This special economic zone will not only bring trade benefits to China, but it would also expand Intelligence and counter-intelligence operations[5]. China can use this land to tap and steal Indian telecommunications. He says the island of China could also be used as a hub for infiltrators of those opposed to Indian interests.

It was developed as part of the Silk Road Project, part of the Belt and Road Plan in China. Also known as the “String Of Pearls” program. The trilogy plans to bring each of the South Asian countries to its side and create a ring – a garland – that will circle India.[6]

But given the current situation, Sri Lanka seems to be moving away from that guarantee. There are six lakh Chinese in Sri Lanka right now. This is not good news for India. It is time for India to make moves of its own. 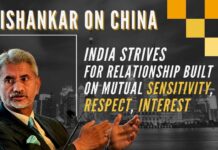