Christian churches in the US are constantly under attack, but the US government, politicians and major media ignore them while focusing on such incidents in India and elsewhere.
[dropcap color=”#008040″ boxed=”yes” boxed_radius=”8px” class=”” id=””]A[/dropcap] survey of local media for a random period of a month between Thanksgiving Day, November 26, and Christmas that was conducted by IANS found that there were reports of at least 45 attacks on Christian churches, ranging from beheading or removal of sacred statues to shooting at churches. Except for five, none of these made it into the major national media. The New York Times covered only a string of attacks on five nativity scenes around Christmas time. The nativity scenes display statues showing the birth of Jesus in a farmshed for animals after his parents could not find a place in Bethlehem’s inns.
“The American media do not cover vandalism in Christian churches the way they do vandalism in Islamic mosques,” William Donohue, the president of the Catholic League for Religious and Civil Rights, said. “Much of the bias is a function of political correctness: there is more sensitivity in the media to anti-Muslim bigotry than there is to anti-Christian bigotry. This is also the fruit of multiculturalism in the schools where Islam is elevated and Christianity is denigrated.”

Symbols of any faith, larger or smaller, should not be mishandled.

While the incidents during the period were confined to property damages, in two cases the attacks took on an ominous turn. In Tennessee, two churches were shot at during the Thanksgiving weekend. No one was injured but the buildings’ windows were damaged.
[dropcap color=”#008040″ boxed=”yes” boxed_radius=”8px” class=”” id=””]T[/dropcap]he victimised churches belonged to various denominations like the Roman Catholic, dissident Catholic, mainstream Protestant and Fundamentalist, and racially diverse with some predominantly black and others white. According to the local media reports surveyed by IANS, the motives for the attacks varied widely. They ranged from inter-church theological differences and racism to opposition to Christianity by Satanic and anarchistic cults and straightforward criminality.
“Unfortunately we know that a lot of people don’t hold much stock in religion anymore and the practice of it.” Monsignor Joseph Rauscher, a Catholic priest told a local TV station in Wilkes-Barre, Pennsylvania. In an attack on his church a statue of the Virgin Mary was toppled Dec 22.
The US-based Universal Society of Hinduism has condemned the attacks on the Christian churches. “We strongly condemn attacks on worship places of any religion/denomination,” Rajan Zed, the organisation’s president said. “Symbols of any faith, larger or smaller, should not be mishandled.”
[dropcap color=”#008040″ boxed=”yes” boxed_radius=”8px” class=”” id=””]H[/dropcap]e added, “Peace and love lies at the heart of all religions. Despite our seriously different traditions, we should learn to live together in harmony, mutual loyalty and trust.”
Religious statues, which Christian fundamentalists consider to be idolatry, were targeted at Catholic churches. At the St Agnes Church in the heart of Manhattan near the Grand Central Station a statue of the saint that had been decapitated earlier was covered with a black garbage bag. “It looks like she is in a body bag after being decapitated,” a worshiper quoted by the New York Post said.
In Livonia in Michigan state, the statue of a saint was damaged and the slogan, “Rome will fall” – a slogan of Fundamentalist opposition to Roman Catholicism, was painted at the site.
Vandalism at some Catholic, Protestant and Christian fundamentalist churches seemed to be the work of cults of devil-worshipers. In Glassboro, New Jersey, two mainstream Protestant and a Fundamentalist churches had their properties defaced with “666,” the sign of the Satan, and upside-down cross, a symbol of devil worshipers.
In Lynwood, California, the arms of statues of saints were cut off and “666” painted at a Catholic church and the same symbol was also painted on a dissident Catholic church in New Jersey.
[dropcap color=”#008040″ boxed=”yes” boxed_radius=”8px” class=”” id=””]S[/dropcap]omeone spray-painted “Whos (sic) God!?” on the doors of the First Baptist Church in Moody, Alabama. In a rare response to attacks on churches, Alabama state had introduced in July jail terms for repeat offenders.
In at least five of the incidents in the survey, banners or signs declaring, “Black lives matter,” a reaction to police shooting of African Americans, were damaged or removed from churches, both predominantly black or white.
Among Christians racism is a problem that prompted the late Martin Luther King to say that “the most segregated hour of Christian America is eleven o’clock on Sunday morning” when churches hold their worship services.
A gauge of the deep divide was in June – outside the period surveyed – when a white man killed nine people at an African American church in South Carolina. And in October, seven black churches were set fire in Missouri. 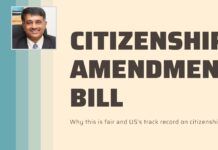 Rajeev Srinivasan on passing of historic bill CAB, protests in Assam and USCIRF on CAB 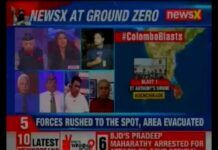 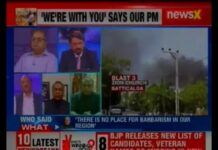 Post Sri Lanka blasts – what next and how can India help? Sree Iyer debates at @NewsX