If the pandemic has been allowed to spread, our creaky healthcare infrastructure would have simply collapsed under the weight of the challenge.

Every crisis creates challenges, and the graver the crisis the more formidable is the challenge. But along with these come opportunities too. It is for the policymakers to recognise and act on them. The PV Narasimha Rao government used the unprecedented economic catastrophe India faced at the beginning of 1991 as an opportunity to dramatically reform the country’s economy, turning existing presumptions and beliefs on their head. Today, India is in the grip of a pandemic, COVID-19, which has brought national life to a standstill. It is an opportunity to revamp our healthcare system beyond recognition. Once again, the time has come to make unprecedented decisions.

But for the Nationwide lockdown which greatly reduced person-to-person contacts, the disease would have caused far greater havoc than it has. Had the pandemic been allowed to spread, our creaky healthcare infrastructure would have simply collapsed under the weight of the challenge. One shudders to even imagine the consequences. Just how precarious the situation is, can be gauged from the following facts.

In FY2020, per capita spending was less Rs 200 per person, according to official figures, with a dozen States spending under one per cent of their GDP.

According to the National Health Profile-2019 figures released recently, India’s expenditure on health was just 1.28 per cent of its Gross National Product (GDP) in 2017-18. It is among the lowest globally, with even countries such as Sri Lanka and Indonesia having a better record. If we continue to march in this fashion, we shall not be able to achieve even the modest 2.5 per cent target over the next five years. There is no point in taking solace from the fact that our total per capita spending on healthcare has almost doubled, from Rs 1008 per person in the financial year 2015 to Rs 1944 in the financial year 2020. This is still far too low for a country that is faced with multiple health challenges such as diabetes, cardiac problems, hypertension, tuberculosis, malaria etc.

The laxity on the healthcare front is not new. In the 1st Five-Year Plan, only 3.5 per cent of the total plan investment was kept aside for health. While that went up to 6. 5 per cent by the 11th Five Year Plan, health challenges too had grown manifold by then, rendering the amount grossly inadequate. In FY2020, per capita spending was less Rs 200 per person, according to official figures, with a dozen States spending under one per cent of their GDP.

Just how little we have prioritised spending in this vital sector is evident from the following figures: The country’s per capita healthcare spending for 2013 was $56; for 2014, it went up by just $1; for 2015, it was $3 more than the 2013 number; and, for 2016, it was $7 more than the 2013 figure. When the figures needed to grow by leaps and bounds, they increased only marginally. By contrast, Sri Lanka’s per capita expenditure on health was $153, and in the African nation of Tunisia, it was $257.

The other fact is that the allocation for health in the Union Budget 2020-21 registered only a modest increase of less than six per cent from the revised estimates of the previous financial year. Most experts believe that such incremental enhancements do virtually nothing to improve the country’s healthcare system. While a comparison with the US — a highly developed country — may not be appropriate, it will cause no harm to see it in perspective. The US’s health expenditure is 18 per cent of its GDP.

Indian Pharma companies have a global reputation for quality products, but they have to often depend on the import of raw material for their production. This needs to change as far as possible.

It is true that over the last few years, India has ramped up its healthcare, with the advent of schemes such as Ayushman Bharat, which mandated, among other things, that close to 1.5 lakh health and wellness centres would be created across the country. Several time-bound programmes have also been launched to contain communicable and non-communicable diseases. But far more needs to be done. Besides, the new health programme takes care of the financial aspect for the needy; the quality of healthcare, even at the primary and tertiary levels, remains far from satisfactory.

According to a Brookings report, India has 0.55 beds per 1,000 population. The availability of beds for senior citizens is also low — 5.18 beds per 1,000 population. Some States fare even worse than the national average of 0.55 beds; Bihar, Chhattisgarh, Haryana, Gujarat and Jharkhand are some of them. Imagine, had the Coronavirus outbreak been greater in the country than it presently is, patients would not have had beds in hospitals, let alone adequate medical treatment.

The ratio of doctors to the population is also not healthy. While the World Health Organisation (WHO) prescribes a doctor-population ratio of 1:1,000, in India it is 1:1,445. Union government over the years have sought to wash their hands off the issue, saying that health is a state subject and thus the primary responsibility lies with the state regimes. But the time for passing the buck has now gone.

The Modi government must seize the opportunity that COVID-19 has provided and initiate reforms that are as ambitious as the economic reforms of 1991 were. This calls for a holistic approach, involving multiple stakeholders such as healthcare infrastructure providers, drug manufacturing companies, NGOs etc. Indian Pharma companies have a global reputation for quality products, but they have to often depend on the import of raw material for their production. This needs to change as far as possible. The government must also undertake a targeted programme for the indigenous manufacture of Personal Protection Equipment (PPE) for medical and para-medical staff. The production of ventilators too, needs to be boosted. These products have use in the long-term too, beyond the COVID-19 crisis. Far far too long we have been dependent on other countries for such critical equipment.

At the core, however, lies the urgent need to dramatically increase budgetary support for healthcare. Prime Minister Narendra Modi often emphasises on ‘Fit India’. Now is the time to realise it. A major surgical strike on the healthcare setup is called for. 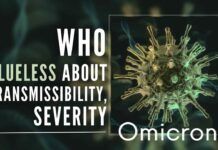 Nirmala Sitharaman, marinated in JNU, may actually cause unraveling of Indian...