The Central probe agency, under the Union Finance Ministry, has filed a total 13 FIRs under the PMLA to probe terror financing instances in the Kashmir Valley

Mainstream political parties in Kashmir valley have started feeling the pinch of massive crack down on Jamaat-e-Islami cadre and other separatist leaders involved in terror funding cases.

So far, these mainstream leaders were trying to position themselves as one of their well-wishers and raising voices in their support.

But despite making the best possible efforts they have failed to convince the central government agencies about the need to adopt a certain degree of leniency while tackling them.

Instead, a section of Kashmiri politicians, who have been hobnobbing with some of these separatists and Jamaat-e-Islami cadre to reap electoral benefits are feeling cornered now.

A sword is already hanging over their heads especially in the run-up to the Lok Sabha polls as different investigating agencies are zeroing on real beneficiaries and keen on winding the probe at the earliest.

Not only the image of these politicians have taken a major hit but their support base too is shrinking due to a massive crackdown on Jamaat-e-Islami cadre.

It is no political secret that Jamaat-e-Islami cadre had played a pivotal role in electing public representatives from several key constituencies across Kashmir valley and always supported a political party in a bid to penetrate their cadre in the corridors of power.

The Centre had earlier banned Jamaat-e-Islami Jammu and Kashmir for five years under anti-terror law on grounds that it was “in close touch” with militant outfits and was expected to “escalate secessionist movement” in the state.

Several properties, including residential houses belonging to various JeI leaders and activists, were sealed in many areas of the city and elsewhere in the Valley. Bank accounts of different Jamaat-e-Islami leaders have been frozen by the investigating agencies.

It is for the same reason several mainstream politicians are crying foul over the strict enforcement of law and feeling nervous as these agencies are gradually achieving success in tracking down leads of the money trail, their links with the hawala network and terror operatives.

NIA had arrested Salahuddin’s son Syed Shahid Yousuf in this case in 2017 and the J-K government had later suspended him from service as he was working in the state agriculture department.

According to official sources, over two dozen properties have already been identified and soon the process of attaching or confiscating them would begin across Kashmir valley and other parts of the state.

Multiple agencies like the Enforcement Directorate (ED), the National Investigative Agency (NIA) and the Income Tax Department have been working in tandem to join the dots on the basis of preliminary investigations going on in the terror funding cases.

While the ED has identified 25 assets “linked” to  LeT Chief Hafiz Sayeed and his associates for attachment under the Prevention of Money Laundering Act (PMLA), a similar action will be conducted to freeze four properties of J-K based separatist Shabir Shah.

So far the ED has identified assets worth about Rs 7 crore as part of its money laundering probe in terror financing cases.

While it has recently attached a Gurgaon-based asset of Zahoor Ahmad Shah Watali, an alleged aide of Sayed, worth Rs 1.03 crore, the probe agency will undertake a similar action against his assets based in Srinagar, Jammu, Delhi, Dubai, London and an ancestral home in Handwara (Kupwara district) of J-K.

During the on-going probe in the matter, these investigating agencies have identified Individuals who have been providing money to all major terrorist groups like Lashkar-e-Toiba (LeT) and Hizbul Mujahideen as also Hurriyat leaders, separatists and stone pelters in Jammu and Kashmir.

The Central probe agency, under the Union Finance Ministry, has filed a total 13 FIRs under the PMLA to probe terror financing instances in the Kashmir Valley and it has attached assets worth over Rs 29.84 lakh in these cases. Similar action in five more cases is in progress.

The I-T department, in the last few weeks, has carried out searches against some groups and individuals and is conducting their assessments under anti-tax evasion and benami charges.

Hizb-ul-Mujahideen, the most active terror outfit in Kashmir, has been responsible for funding terrorist and secessionist activities in Jammu and Kashmir.

“Headed by Syed Salahuddin, its self-styled commander based out of Rawalpindi in Pakistan, it funds terrorism on Indian soil through monies organised by a trust called JKART (Jammu and Kashmir Affectees Relief Trust) in alleged connivance with the ISI and other Pakistan-based entities,” the ED said in a statement.

It said the probe found that “terror funds” were being sent to India through the hawala — illegal way of routing money by skirting banking channels, barter trade and human carriers.

“The funds are illegally distributed to the next of kin of Hizbul Mujahideen terrorists, active and dead,” it said.

Earlier,  NIA had arrested Salahuddin’s son Syed Shahid Yousuf in this case in 2017 and the J-K government had later suspended him from service as he was working in the state agriculture department.

Shah and three others are lodged in the Tihar jail in the national capital in connection with this terror funding case, the ED said. 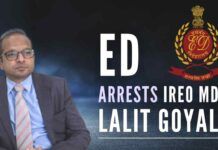