Dancing Krishna idol traced to a US museum

A dancing Krishna idol, stolen in 1966 from Sri Ekantha Ramaswamy Temple, in Rameswaram, Tamil Nadu, was traced to the Indianapolis Museum of Art, USA, during an investigation, the state Idol Wing CID said on Thursday. While investigating a complaint from the executive officer, Hindu Religious and Charitable Endowments Department, pertaining to the dancing Krishna idol, the team under Additional Superintendent of Police G Balamurugan found that a total of six idols were stolen from the temple and these including the idols of Krishna alias Kendarva Krishna (dancing posture), Vishnu (two idols), Sridevi and Bhoodevi (two).

The temple’s Executive Officer G Narayani had in November this year complained that three or more idols including an antique Krishna idol belonging to Sri Ekantha Ramaswamy Temple, Thangachimadam village, Rameshwaram Circle, had been burgled from the temple in 1966. As no image of the dancing Krishna idol was available in the temple records, the Idol Wing sought and obtained help from the French Institute of Pondicherry (IFP) and verified the photo images. “It came to light that the temple had 12 metal idols in 1958 and in 2012, the temple priest handed over six metal idols to HR & CE officials. So, a total of six idols had been stolen from the temple,” DGP, Idol Wing, K Jayanth Murali said.

DGP, Idol Wing digs it out

“As a logical next step, it was decided to investigate and trace the idols if they had been smuggled and sold abroad. During the investigation, while perusing various websites of museums in the world, the idol of dancing Krishna similar to the IFP image was found displayed on the website of Indianapolis Museum of Art[1], Indiana, USA,” he said in a release.

The downloaded image was compared with the photo available with the IFP and experts opined that the two photographs of Lord Krishna (in dancing posture) were one and the same. This missing idol was later purchased by the Indianapolis Museum of Art. The Idol Wing is making efforts to trace the remaining five missing idols.

Documentary proof claiming ownership of the dancing Krishna idol is in the process of being prepared and soon it would be submitted to the USA seeking its return to the Vishnu temple.

DGP Jayanth Murali and IGP Dhinakaran lauded Balamurugan and his team for tracing the idol and preparing the MLAT (Mutual Legal Assistance Treaty) in a record less than two weeks’ time.

A specially minted SBT/ Digital Medal was announced as a reward to the team for good work.

The DGP thanked Colonel Mathew Bogdanos, Manhattan District Attorney’s Office for the help in the investigation.

Recently a court in Tamil Nadu convicted Subhash Chandra Kapoor (running an art gallery in New York known as Art of the Past Gallery ) for smuggling 19 idols from various temples in the State (valued more than Rs.94 crores) to the United States for 10 years. Indian origin Kapoor is a US Citizen and in 2012 deported to India from Germany.[2] 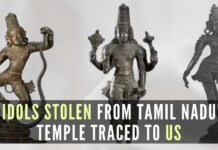