[dropcap color=”#008040″ boxed=”yes” boxed_radius=”8px” class=”” id=””]F[/dropcap]ederal Reserve Chair Janet Yellen indicated that the option of further interest rate hikes was open, but the process of flagging risks could restrain any further moves. Mixed reactions were seen in the US stocks closing.
On Wednesday, The Dow Jones Industrial Average dropped 99.64 points, or 0.62 percent, to 15,914.74. The S&P 500 fell 0.35 point, or 0.02 percent, to 1,851.86. The Nasdaq Composite Index edged up 14.83 points, or 0.35 percent, to 4,283.59.
“With gradual adjustments in the stance of monetary policy, economic activity will expand at a moderate pace in coming years and that labor market indicators will continue to strengthen,” Yellen said in a testimony before the Committee on Financial Services of the US House of Representatives on Wednesday.
Yellen acknowledged that financial conditions have become less supportive of growth, “with declines in broad measures of equity prices, higher borrowing rates for riskier borrowers, and a further appreciation of the dollar.”
“These developments, if they prove persistent, could weigh on the outlook for economic activity and the labor market,” Yellen said.
[dropcap color=”#008040″ boxed=”yes” boxed_radius=”8px” class=”” id=””]Y[/dropcap]ellen’s testimony failed to offer any signal on whether the central bank will change the interest rate on its next policy meeting on March 15-16. She only repeated that the actual path of the interest rate will depend on incoming data.
There is no major economic report due out Wednesday.
Overseas, European equities rebounded Wednesday. German benchmark DAX index at Frankfurt Stock Exchange jumped 1.55 percent, while British benchmark FTSE 100 Index rose 0.71 percent.
In Asia, Tokyo shares retreated further Wednesday on stronger yen and concerns over global banking sector, with its benchmark Nikkei index dropping over 2 percent after a 5-percent decline in the previous day.
(IANS) 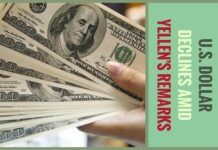 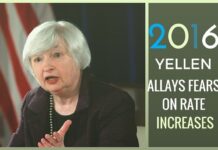 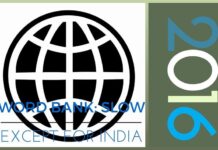 World Bank tones down growth for 2016, but cites India as the lone bright spot