Addressing the 50th-anniversary celebrations of the International Crops Research Institute for the Semi-Arid Tropics (ICRISAT) at Patancheru near here, he suggested to the institute and the Indian Council of Agricultural Research (ICAR) to expand their partnership for higher productivity and water management in dryland areas to digital agriculture.

The Prime Minister claimed that India has stepped up its efforts in using the latest technology like Artificial Intelligence (AI) in areas like crop assessment, land records digitization, deployment of drones for spraying of insecticides and nutrients, and providing various services.

“On one hand, we are focusing on expanding production of millets, chemical-free farming while on the other we are using modern technology from solar pumps to deploying drones. This is a key part of our vision for agriculture growth for the next 25 years,” he said.

Modi said the government was trying to develop ecosystems linked to agriculture research and working with private agri-tech players to provide affordable and high-tech services to farmers.

The Prime Minister said that agriculture has the potential to pull a very large population of the country out of poverty and take them towards a better lifestyle.

Stating that a large area lacking irrigation facilities could not become part of the green revolution, Modi said the government was working on a dual strategy. On the one hand, a large part of the land is being brought under irrigation through water conservation and connecting of rivers while on the other, water use efficiency through micro-irrigation is being encouraged in areas with limited irrigation.

The Prime Minister said India was also focusing on establishing FPOs (Farmer Producer Organisations) and agriculture value chain. “We wish to create an alert and potent market force out of small farmers by organizing them into thousands of FPOs”, he said.

He said that India’s goal is not just increasing food grain production. India has enough surplus food grain to run one of the world’s big food security programs. “We are focusing on food security as well as nutrition security. With this vision, we have developed many bio-fortified varieties in the last 7 years.”

Noting that ICRIAST has rich experience of working in semi-arid areas, the Prime Minister called for joint efforts with the institute for developing sustainable and diversified production systems by linking farmers.

Modi also mooted the idea of ICRISAT, ICAR, and agricultural universities working together in the area of biofuel. “You have been working on sweet sorghum. You can develop seeds to help farmers in drought-prone areas and farmers with limited land resources to grow crops which can yield more biofuel,” he said.

He exuded confidence that with innovative minds at ICRISAT, people’s participation, and society’s commitment the country will be able to overcome all challenges related to agriculture

Underlining the importance of the next 25 years for both the country and also for ICRISAT, the Prime Minister stressed the need for new goals and working for them.

The Prime Minister lauded ICRISAT for its contribution in helping agriculture in a large part of the world including India. He appreciated their contribution to water and soil management, improvement in crop variety, on-farm diversity, and livestock integration. He also praised their holistic approach in integrating farmers with their markets and promoting pulses and chickpea production in Andhra Pradesh and Telangana. “Your research and technology have helped make agriculture easy and sustainable”, Modi said.

The Prime Minister said that the worst affected by climate change are the people on the last rung of development with little resources. That is why the Prime Minister reiterated India’s request to the world to pay special attention to climate change. He talked of LIFE- Lifestyle for Environment; P3 – Pro planet people movements and India’s net-zero target by 2070. “Pro planet people is a movement that connects every community, every individual with climate responsibility to tackle the climate challenge. This is not limited to just words, but is also reflected in the actions of the Government of India”, he added.

Referring to 15 Agro-Climatic Zones and 6 seasons of the country, the Prime Minister highlighted the depth of ancient experience of Indian agriculture. He pointed out that India’s focus is on the fusion of ‘back to basic‘ and ‘march to future‘ to protect its farmers from climate challenges. “Our focus is on our more than 80 percent farmers who are small and need us the most”, the Prime Minister said.

The Prime Minister said that the National Mission for self-reliance in edible oils indicates India’s new approach. The Mission aims to increase palm oil area by 6.5 lakh hectares in the next five years. “This will help Indian farmers at every level and will prove very beneficial for the farmers of Andhra Pradesh and Telangana as well. I have been told that Telangana farmers have set big goals for palm oil production. The Centre will extend them all help,” he said.

He also dwelled on the steps taken to strengthen post-harvest infrastructures like creating a cold chain storage capacity of 35 million tonnes and creating of Rs.1 lakh crore Agriculture Infrastructure Fund.

Earlier, he visited an exhibition displaying various achievements, scientific agricultural breakthroughs, and innovations of the Institute since 1972 which address poverty, malnutrition, and environmental degradation in the harshest dryland regions of the world.

ICRISAT is an international organization that conducts agricultural research for development in Asia & sub-Saharan Africa. It helps farmers by providing improved crop varieties and hybrids and also helps smallholder farmers in the drylands fight climate change. 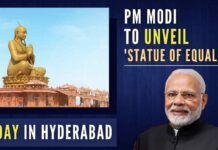