[dropcap color=”#008040″ boxed=”yes” boxed_radius=”8px” class=”” id=””]A[/dropcap]griculture multinational, Monsanto, that is doggedly pushing Genetically Modified (GM) seeds in India despite the spectacular collapse of Bt Cotton, has been fraudulently introducing Round-Up resistant GMO Cotton in a number of States, without the knowledge and approval of the statutory bodies, most notably the Genetic Engineering Approval Committee (GEAC). The affected States include Maharashtra, Andhra Pradesh, Telangana, Madhya Pradesh, Orissa and Gujarat.

RRF is Bt cotton with the addition of a herbicide-resistant gene, which has specifically been banned by the Supreme Court.

Monsanto is aggressively marketing its products in the hope of securing a post-facto approval, as when it entered India in 1995 and marketed Bt Cotton and lobbied the then government for approval, which it secured in 2002. Environmental activist, Vandana Shiva, had then gone to the Supreme Court, but the case was closed when Monsanto managed to secure government approval for Bollgard-I Bt Cotton. Recently, confident of managing approval for GM-Mustard with the help of a vocal lobby, it planned a merger with Bayer (which was buying it out); share prices began to rise when the Competition Commission of India put a spanner in the works.

The discovery of Round-Up resistant Cotton has been scientifically validated by the Central Institute for Cotton Research, Indian Council of Agricultural Research, Maharashtra, which tested samples of seed-cotton from nine fields of seven villages in Nagpur district. All tested positive for Bollgard-II and EPSPS, Round-Up-Ready-Flex (RRF).

Further, seeds from the samples were subjected to 270 tests (Cry1Ac and Cry2Ab) and found positive, barring a handful. RRF is Bt cotton with the addition of a herbicide-resistant gene, which has specifically been banned by the Supreme Court.

[dropcap color=”#008040″ boxed=”yes” boxed_radius=”8px” class=”” id=””]E[/dropcap]nraged at Monsanto habitually bypassing the mandatory screening and scientific processes before releasing new forms in agriculture, and getting them approved post facto, the RSS think tank, Swadeshi Jagran Manch, and leading environment organisation, Navdanya (of Vandana Shiva), have urged Prime Minister Narendra Modi to order a criminal investigation into the matter and ban Monsanto from operating in India, after exacting fines and due compensation for the damage done to farmers whose soil has been contaminated.

India regulates GM crops under The Rules for the Manufacture, Use, Import, Export and Storage of Hazardous micro-organisms, Genetically engineered organisms or cells, issued under sections 6, 8 and 25 of the EPA.

On World Health Day (7 April) it is pertinent to point out that Round-Up, a glyphosate-based herbicide, has been declared a “probable carcinogen” by the World Health Organisation; it is banned in several European countries in all forms and combinations. Sri Lanka banned glyphosate after over 20,000 people died and two lakh experienced kidney failure in a short period. Scientists linked the deaths directly to the use of this herbicide.

RRF Bt Cotton represents a major health hazard for citizens as well as the soil which, once contaminated, could infect other crops grown in the same fields. SJM co-convener, Ashwani Mahajan, says Round-Up is highly toxic and is known to cause cancer, kidney failure, autism, DNA damage, and even disrupts the endocrine system. Argentina has seen a sharp rise in birth defects, cancers, kidney failures, infertility and other diseases due to unchecked use of Round-Up.

[dropcap color=”#008040″ boxed=”yes” boxed_radius=”8px” class=”” id=””]V[/dropcap]andana Shiva says GM crops do not have higher yields or better nutrition. In fact, they render the soil dead, destroy biodiversity and cause death and diseases in plants, animals and human beings. Monsanto has deceived Indian farmers and the Government by illegally introducing RRF Bt Cotton, and must be brought to account for its reckless profiteering.

Indian agriculture rests on biodiversity. The Indian farmer harvests and uses every bit of biodiversity, from the grass on the boundaries of farms to feed cows, to eating seasonal green leafy vegetables. Round-up will not only kill all this biodiversity, but will bequeath cancer to farmers and consumers, besides robbing India of food self-sufficiency and ruining the food culture of millions of rural Indians.

This is why the Technical Expert Committee of the Supreme Court had concluded that Herbicide-tolerant crops should not be allowed in India as they kill all plants. In a land of rich biodiversity, they can destroy the food security and livelihood of small farmers. Herbicide-resistant traits can also contaminate crops of which India is a centre of Diversity.

Since its entry in 1995, Monsanto has extracted Rs 7000 crore from poor cotton farmers and is directly responsible for pushing farmers into debt and suicide. Since 1995, over 3,10,000 farmers have committed suicide, most of which are from the cotton belt of India.

India regulates GM crops under The Rules for the Manufacture, Use, Import, Export and Storage of Hazardous micro-organisms, Genetically engineered organisms or cells, issued under sections 6, 8 and 25 of the EPA. These permissions mandate Monsanto to ensure that there is no escape of genetically modified seeds into the environment.

[dropcap color=”#008040″ boxed=”yes” boxed_radius=”8px” class=”” id=””]I[/dropcap]t is, therefore, shocking that Monsanto released Round-Up-Ready-Flex (RRF Bt Cotton) seeds across lakhs of acres in various districts of Gujarat, Odisha, Maharashtra, Telangana and Andhra Pradesh. It seems to have released RRF trait after transferring it into several local varieties, to induce farmers to grow herbicide resistant cotton so as to sell the herbicide Round-Up in large quantities. This is a prelude to pressure the Government/GEAC to approve the RRF trait on grounds that it is popular with cotton farmers.

The release of seeds with unapproved genetically modified traits in vast areas of important cotton-growing States violates various provisions of the Environment Protection Act and is punishable under Section 15 of the EPA. Monsanto must be investigated for such serious breach of conditions they are supposed to adhere to while handling hazardous micro organisms and genetically modified traits. It must also be made to pay fines to clean the environment from the pollution caused by the unauthorised release of RRF trait in cotton, which could run into thousands of crores of rupees.

Monsanto should also be charged under relevant sections of the Biodiversity Act which has been violated, as in the case of Bt Brinjal, as it has used Indian cotton Germplasm without the approval of the Biodiversity Authority to transfer trait and released them into the environment. India with its rich biodiversity does not need GM crops; however, those committed to the claims of this fraudulent science should first develop a robust and independent biosafety assessment system to evaluate and monitor the same. 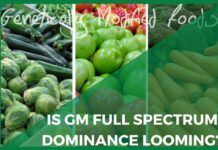 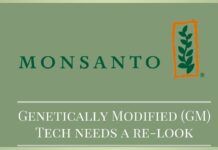 Was RSS pressure on GM behind Javadekar ministry change?