Sree Iyer: Namaskar, Hello and welcome to episode 109 of Daily Global Insights. Today is the 2nd of March 2021. I have with me Sridhar Chityalaji. Sridhaji, please welcome to our daily broadcast and I hope it brings out a great morning in New York today, sir.

Sridhar Chityala: It is, good morning to you and good morning to everybody or good evening to those who are in the other side of the world. Yes. It is very bright sunny one of those days where we have probably touch 52 and then, you know, we’ll go backslide back into the 40s. Yes, looking forward to an exciting day.

Sree Iyer: Today’s main points are 21 IP addresses resolving to ten distinct Indian organizations in the power generation and transmission sector along with two in the maritime sector were targeted by the red hack, it is a well-known hacking unit from China. We give you more details in a moment.

The house in the United States Congress has passed and 1.9 trillion dollar bill, but fails to pass the $15 per hour minimum wage that is still encountering a lot of resistance.

The third one is should the US consider Latin America as the manufacturing option representation green suggesting this as an option instead of China.

Now back to the United States news. The Supreme Court has rejected all the lawsuits of Sidney Powell challenging the election results in Arizona and Wisconsin, would you like to add a little bit more about these lawsuits?  Have they run their course now?

Sridhar Chityala: I think so, the lawsuits have run their course, and we saw that even in the Pennsylvania situation, I think the court has taken there are no reasons given the SCOTUS are taken view. It’s over it’s done. Let’s move on.

Sree Iyer: Chicago schools are opening doors to thousands of more students now, it is hoped that this would become more and more prevalent across the country, so we have to wait and see if there is going to be again a rise in covid cases, will keep you informed on that.

Capital police Union Chief has said that many police officers wanted to quit or retire after the January 6th event. Katrina Pierson a former Trump aid is considering a bid for an open house seat in Texas. How do you rate her chances?

Sridhar Chityala: I think Texas is a very strong Republican. And I think that given all the things that are going on in Texas right now around the immigration, border control, the ban on the Keystone Pipeline, the ban on further leases for fracking, you know, all these points. Texas is the energy epicentre of the United States. So you can look at you know, three specific areas, which is namely this whole immigration stuff. The second is around the energy strategy and probably the third is this $15 minimum wage. I don’t think that’s going down well in many of the states.

Sree Iyer: The US is focused on reuniting migrant families. This is the Department of Homeland Security Mayorkas’s statement, and there are now signs that more tents are being built to house these immigrants, so, you can expect a rush to the United States border because of all this news who knows how much amplification happens as it percolates down south. So there is going to be a crisis coming up and it is now apparent because Biden has acknowledged that there is a border crisis ahead of his meeting with the Mexican president. Now, if he knows there is a crisis why do they keep making these statements?

Sridhar Chityala: They make these statements because it was their Progressive political agenda, which is around this to keep the borders open to decriminalizing the borders and as well as to ban any eviction programs for those who have illegally entered the country. So, therefore for those who have illegally entered the country, there is no question of ICE which is the Immigration Control and Enforcement and those who attempt to enter the model illegally, there’s no criminalization. So, therefore there is no question of holding them. Second, there’s no deportation, all the three things have gone. So, what has happened is that 69,000 people were sent back during President Trump time. They all preached their tents and they recognized that should Biden should win, that is going to be far more open. So, it looks like one tent has got cleared now, more tents are coming up.

And it’s interesting that Mr. Mayorkas has made a statement about the border issue as a result of Trump’s policies. Trump actually block people from coming to/ the wall has been stopped as well. So, I don’t know what makes him think that what they are doing is quite correct when it is opposed by a number of Southern States.

Sree Iyer: Sir, there is the fundamental fear about how the US is going to control the status of health of all these immigrants who might be coming in. After all the United States is still one of the countries with the largest number of people afflicted with covid. So, you have a global emergency. What is the rush now to allow more immigrants to come in? What are these people are afraid of? They have a four-year run and why is this rush? And isn’t it, also putting the rest of the country’s population in Jeopardy? 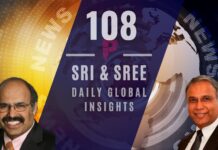