How will MiFID II affect the capital markets?

First, it was BREXIT. Now a new regulation titled MiFID II is going into effect throughout the European Union (EU) from Jan 3, 2018, onwards. Brought in to regulate High-Frequency Trading (HFT) in the EU, one major implication of this new regulation is that Brokers/ Salespeople can no longer provide free research for stocks and other financial instruments. First off, there is a new set of regulations that all companies have to comply with. Add to that the above restriction… Will this cause a slowdown in Capital markets? The Infographic that follows this post, prepared with the help of data from Price Waterhouse Coopers seems to suggest so. But before jumping into that, let us examine the reason for a new regulatory standard in the EU.

HFT in the European Union

Development in trading technologies enabled the use of automated and very fast trading technologies[1]. In other words computers were trading with each other and because of no human element, small changes in stock tend to get amplified. Because of HFT, the trading landscape has led to higher competition between trading venues, the fragmentation of trading in the same financial instruments across venues in the EU.

A series of events such as the Flash crash of 2010 in the US, problems faced at BATS during the IPO of Facebook due to a malfunctioning algorithm appears to have had a sobering effect on the European markets. In 2007, the European Union (EU) drafted a directive titled Market in Financial Instruments Directive (MiFID) which has re-shaped the markets in the EU. As all Rev 1s go, this one too was revised and a MiFID II was released[2]. This is going to be in effect from January 3, 2018. A quick look at the standard shows that it is a bit vague. So on Apr 25, 2016, the European Commission issued a technical standard, something that would explain how one should implement the articles on HFT in MiFID II.

The details make interesting reading. It sets a very low benchmark on restricting HFT through regulation[3]. Almost everyone is considered to be doing High-Frequency Trading. Therefore the regulation is going to be slack – which will benefit every shade of HFT trader. It will punish the traditional broker/ dealer though.

How is the industry taking it?

For the most part, everyone in the industry is silent, even the perceived losers. Is it because HFT is a complex subject that people are still getting their hands around? Or is it because it is still not yet implemented and they will react once they see the effects? No one knows. Even the members of the European Parliament appear too busy with other stuff to take a look at this.

The winners, HFT traders are cautious because they do not want much debate around this topic. Let it move stealthily till it becomes the law, seems to be their approach. In a questionable move, the person overseeing the area of high-frequency trading in the financial supervisory authority of the Netherlands (base and origin of many large HFT firms), an expert in the preparation of technical standards, was appointed as the secretary general of the biggest HFT lobbying group!

It is a given now that most trading is happening between computers; investing might still be done manually but trading has been automated for the most part.

The market hates volatility. BREXIT started it and now with MiFID II, the markets will experience a cooldown, in the short term. But long-term challenges remain. The Infographic below lists some of these:

In conclusion, expect some turbulence ahead. 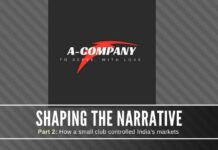 Is NSE becoming its own Judge, Jury and Acquitter?

Tata Group will start a battery company, blueprint is being prepared...

Assam’s much awaited Subansiri dam to be operational by August next...