[dropcap color=”#008040″ boxed=”yes” boxed_radius=”8px” class=”” id=””]A[/dropcap]s we celebrate twenty five years of economic reforms, the exuberance of entrepreneurial spirit is visible across the country. Liberalization and globalization has contributed to thriving cities and prosperous villages. More and more Indians are dreaming big and turning into entrepreneurs at a young age hoping to create products and services that can transform the country and have a lasting impact on society.

Over the last two and a half decades, more than two hundred million people have been pulled out of poverty, shortages and waits for products and services have vanished and young India is gung-ho about future prospects. India has more billionaires than ever before and corporations head quartered within the country have made it into many of the famed lists like fortune 500 and most admired companies in the world.

As India sheds its socialistic past and moves decisively towards a free market economy, it is time to ask a pertinent question – Who is the father of Indian Capitalism? In sixty eight years of independent India, two names standout amongst many entrepreneurs and industrialists who have contributed to the rise of India in the global economic scene. Mr. Dhirajlal Hirachand Ambani, founder of India’s largest company by turnover and market capitalization, Reliance Industries and Mr. Nagavara Ramarao Narayana Murthy, Co-founder of the Information Technology giant, Infosys Technologies. Their significant achievements and impact on the nation will reverberate across generations of Indians for many decades to come.

Both had humble beginnings but followed different paths in creating enterprises that are currently crown jewels of Indian economy. Mr. Ambani had no formal education but dreamt big. He moved from trading in spices to yarn producing to creating a conglomerate that spawns from oil and gas in manufacturing sector to providing telecommunication and financial advice in services sector. Mr. Murthy, who has degrees from some of the well known engineering colleges in India, is a technology pioneer. After failing in his first entrepreneurial venture, he went on to create an Information Technology giant that was instrumental in Bengaluru earn the sobriquet “Silicon valley of India” and made Indian technology prowess recognized around the world.

[dropcap color=”#008040″ boxed=”yes” boxed_radius=”8px” class=”” id=””]W[/dropcap]hat makes them unique and most qualified to be “Father of Indian Capitalism”? Mr. Ambani made the most of Indian capital markets like no one else. In pre-liberalization era, capital was scarce and most entrepreneurs during that period borrowed from state owned financial institutions by paying a very high cost. Mr. Ambani, instead of going through the usual government banks route, had the revolutionary idea of exploiting the capital markets to fund his expansion plans. He used the stock market to raise money through issue of shares and convertible debentures by convincing four million Indians living in small towns and villages to part with their hard earned savings to invest in Reliance Industries. He was a champion of retail investors and rewarded them amply for unflinching loyalty and belief in his abilities to execute his vision.

In 1977, the year in which Reliance Industries went public, market capitalisation of the company was ₹120 crores ($17.815 million) with an annual turnover of ₹70 crores ($10.39 million). By the time he died in 2002, Reliance Industries was the most valuable company with an annual turnover of ₹70,000 crores ($10.39 billion). The company had produced phenomenal returns for investors, provided employment to more than one lakh people and was a global corporation. He created an equity cult in India that has no parallel and enormous value for millions of shareholders who swear by the company even today.

Mr. Narayana Murthy enabled India to move away from fabian socialism, demonstrated that profits are not a dirty word and creation of wealth through entrepreneurship is an asset to the nation. His message to become rich was ideas, hard work and zero tolerance for corruption. Through Infosys Technologies, he created enormous prosperity for his shareholders and employees. His was the first company in India to offer Employee Stock Option Plan (ESOP) to every worker including Mr. Murthy’s chauffeur. The employee value system he created is much admired and envied by other corporate executives in India as well as across the globe.

[dropcap color=”#008040″ boxed=”yes” boxed_radius=”8px” class=”” id=””]M[/dropcap]r. Murthy set blazing standards for corporate governance and refused to bow down to bribe seekers in government. His decision to pay higher duty to government and claim a refund down the road while refusing to pay bribe to the customs officer is a classic business case study at Harvard Business School. In order to gain credibility amongst its large customer base in the United States, Infosys was listed on the NASDAQ stock exchange, the first Indian company to do so. He has become the poster boy of young entrepreneurs of 21st century India not just in Information Technology but in most other fields as well.

As India powers ahead towards a capitalist economy, there will likely be many more billionaires, wealth creating entrepreneurs and iconic business leaders who would surface periodically and make a lasting impact on the nation. Today, however, Mr. Dhirubhai Ambani and Mr. Narayana Murthy can rightly claim their place in history as trailblazers and for spawning a new generation of wannabe entrepreneurs. Time and economic historians will best judge who amongst the duo is entitled to don the mantle of Father of Indian Capitalism.
Note:
1. The conversion rate used in this article is 1 USD = 67.37 Rupees.
2. Text in Blue points to additional data on the topic. Government must take back the land and building illegally used by Rajiv Gandhi Foundation: Subramanian Swamy 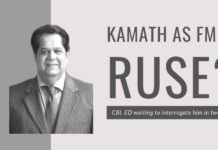 Who is planting news on ICICI Banker K V Kamath to be the next Finance Minister?