Shekhar Gupta would do well to reconsider his views on southern states taking into account what has been happening in different parts of the country, including Jammu & Kashmir, since years now.

On August 20, former editor of The Indian Express Shekhar Gupta posted a number of controversial tweets. One of the tweets read: “Actually, I am for the Southern States forming a federation of their own, but on one condition; they must first settle their river-water disputes…” Indeed, his suggestion was not in the larger national interest. It was as provocative as it was dangerous, divisive and unsettling. It negated the very concept of India as a nation and impressed and enthused those who considered India a congregation of nations with each nation having the right to secede.

It would be only desirable to revisit 1930-1931 to know who mooted the idea of the federal polity in India consisting both of the British Indian provinces and the princely states, who supported this idea and why? Such an exercise is a must to put things in perspective.

The Indian freedom struggle was in full swing. The all-white Simon Commission had triggered massive protests across the nation, coupled with slogan: “Go back Simon”. Lala Lajpat Rai, the Lion of Punjab, had died as a result of the lathi blows inflicted on the ailing Congress leader at Lahore while leading a massive protest demonstration against the visiting Simon Commission. The Congress had also adopted in December 1929 “Purna Swarajya” as its goal on the bank of River Ravi at Lahore and permitted civil disobedience movement, which started on March 12, 1930. It had “stirred India to depths” (Munshi, KM., Indian Constitutional Documents, Vol. 1, p.26). Soon the civil disobedience movement entered the phase of the boycott of foreign goods. As was expected, the British Government unleashed a reign of senseless brutalities on the peaceful unarmed Indians to crush the movement, but with no result. The British atrocities didn’t deter the determined Indians. They were committed to obtain “Purna Swarajya” at whatever cost.

And just when Indians in their thousands were filling jails or facing bullets, lathis, and loss of property, some essentially unrepresentative Indians had gone to London to participate in the First Round Table Conference for constitutional talks with the three-party British delegation. The first session of the conference started on November 12, 1930.

Interestingly, the Congress had held itself aloof from the First Round Conference. Bulk of Indian business leaders had also kept themselves away. However, Homi Mody was conspicuous by his presence. Muslim politicians were there in the Conference in good strength. Some of them included Muhammad Ali, Muhammad Shafi, Aga Khan (spiritual leader of Shia Imami Ismaili Muslims), Fazlul Huq and Mohammad Ali Jinnah. “Fazel-i-Hussain was an important behind-the-scenes influence (Sarkar, Sumit, Modern India, p. 308). He was a member of the Viceroy’s Executive Council. Prominent Hindu Mahasabha leaders BS Moonje and MR Jayakar; liberals like Tej Bahadur Sapru, CY Chintamani and Srinivasa Sastri, and a number of princes too had gone to London to take part in the Round Table Conference. To be more precise, the total number of delegates to the First Round Table Conference was 89. The break-up was: 16 from Princely India, 57 from 11 British Indian Provinces and 13 from the three political parties in the United Kingdom.

The mass upsurge across the nation had made application of the Simon Commission Report of May 1930 “all but impossible”. The reason was that it had provided for no change at all in the Central Government. It had only contemplated responsible government in the provinces in place of dyarchy and it was coupled with some vital “emergency powers reserved with Governors”.

It needs to be underlined that most of the Indian Princes, Raja, Maharajas and Nawabs were against the idea of a strong Centre.

Lord Irwin, the Governor-General and Viceroy of India, had candidly acknowledged in private to the Secretary of State for India, Wedgewood-Benn, on 19 June 1930 that the Simon Commission Report, if implemented in its original form, “will provoke an explosion” in India. The upshot of his whole argument was that the Simon Commission had nowhere mentioned “Dominion status”. His suggestion was that “some sort of promise of a change at the centre was evidently necessary” (Ibid.).

And, it was here that the idea of federation comprising British India and princely India was mooted. According to Left historian Sumit Sarkar, “the idea came as a real godsend for the British”. A federal assembly at the Centre with a bulk of members “nominated by princes should prove a safe enough body” for London.  It was no wonder then that the British Prime Minister, Ramsay MacDonald, announced at the end of the Conference on January 19, 1931 that “His Majesty’s Government will be prepared to recognise the principle of the responsibility of the executive to the Legislature” (The Round Table Conference (First Session) Proceedings, pp.505-508).

According to none other than Sumit Sarkar, “the idea of federation formally came from the princes, specifically from the Dewans of Hyderabad (Akbar Hydari) and Mysore (Mirza Ismail), but Hydari had been persuaded initially by the British Resident, Lt Col. Terence H. Keyes, and the suggestion was eagerly taken up by British officials like Malcom Hailey and British politicians like Reading, Samuel Hoare, Lord Zetland and the Secretary of State for India, Wedgewood-Benn” (Modern India, p. 308).

It needs to be underlined that most of the Indian Princes, Raja, Maharajas and Nawabs were against the idea of a strong Centre. In other words, they vouched for a weak centre believing that their entry into the federal legislature would help them keep the central government “undemocratic”. The mass upsurge in British India had alarmed them. It had led them to believe that the under-intense-pressure-London might grant Dominion Status to conciliate the agitating Indians. They were also against the idea of the Congress dominating the central government.

The fact of the matter is that “there was an objective similarity of interest between princes and Muslim politicians alarmed by the prospect of Hindu majority rule” (Ibid.). Besides, the imperialist Britain had “hedged in the promise of central responsibility with a series of ‘reservations and safeguards’ in the crucial spheres of defence, external affairs, and financial and economic control”. Prime Minister Ramsay MacDonald had made an unambiguous statement to this effect on January 19, 1931 while concluding the proceedings of the First Round Table Conference.

RJ Moore in his Crisis of Indian Unity (p. 155) writes thus: “Working out the details of the scheme would take almost five years, for it soon became clear that federation was chameleon-like, and had been accepted in January 1931 out of a variety of motives. The princes thought it would reduce paramountcy claims, Muslims liked the idea of a weak centre, Liberals like Tej Bahadur Sapru were attracted by the promise of a responsible centre, while most British politicians felt that through it they could grant ‘a semblance of responsible government, and yet retain…the realities and verities’ of British control”.

So, all this should serve to demonstrate that the intentions of those who mooted the idea of federation and vouched for it were not really pious. Their whole objective was to keep the Centre weak. Shekhar Gupta would do well to reconsider his views on southern states taking into account what has been happening in different parts of the country, including Jammu & Kashmir, since years now. India needs a strong, not a weak, central government. The political structure at the centre has to be unitary and the residuary powers must be the sole preserve of the central government. Our experience in Jammu & Kashmir is not inspiring. 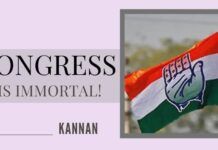 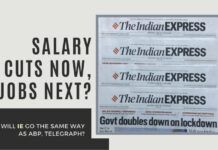 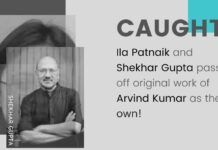 Shame on you Shekhar Gupta for plagiarizing

Nirav Modi to be extradicted to India under US’s RICO Act?

Tamil Nadu is getting ready to usher in a new era...