The Gujarat Police Crime Branch addressed a press conference on June 26 in Ahmedabad following the arrest of Teesta Setalvad in a case related to the 2002 Gujarat riots probe. Chetanya Mandlik, DCP Ahmedabad Crime Branch informed that they will seek 14 days of custody as the activist is not cooperating in the investigation.

The press conference in Ahmedabad was organized following the arrest of Teesta Setalvad in a case related to the 2002 Gujarat riots probe.

DCP Chetanya Mandlik said, “Teesta is not cooperating and not supporting us in the investigation. We will seek 14-day custody today and a thorough probe will be conducted in the case. Teesta will be produced in front of the Magistrate and all her statements will be recorded there. We are getting the documents arranged from various sources.”

Mandlik also added that two out of three accused persons – Teesta Setalvad and R B Sreekumar – have been arrested and will be produced in court later in the day. Meanwhile, the police have already sought the transfer of the third accused, Sanjiv Bhatt, for custodial interrogation, he added. The Ahmedabad DCP further said that as of now, the investigation is at a primary level and strict action will be taken once the probe is done.

He further said, “Former IPS officer R B Sreekumar was arrested yesterday and Teesta Setalvad was arrested today. Forging of evidence and hindering with evidence will be looked into. We will produce both the accused in court by 3 pm. We have done the medical check-up, and the due process was followed by the Crime Branch. The investigation is at a primary level, strict action will be taken once the investigation is done. We have the primary affidavits and documents submitted by the accused. Don’t know the exact date when the conspiracy was hatched; however, the motive was to send innocents to prison.”

Teesta has been booked under Indian Penal Code Sections 194 (giving or fabricating false evidence with intent to procure conviction of capital offence), 211 (False charge of offence made with intent to injure), 218 (Public servant framing incorrect record or writing with intent to save a person from punishment or property from forfeiture) 468 (Forgery for purpose of cheating) and 471 ( Using as genuine a forged document or electronic record), read with 120 B (Criminal Conspiracy). 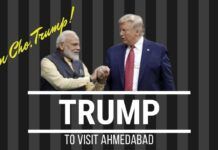