On Sunday evening Shinde took to Twitter and expressed himself. He tweeted, “How can Balasaheb Thackeray’s Shiv Sena support people who had direct connection with culprits of Mumbai bomb blast, Dawood Ibrahim & those responsible for taking lives of innocent people of Mumbai. That’s why we took such step, it’s better to die,” Shinde tweeted in Marathi.

Earlier Rajya Sabha MP Sanjay Raut had used unparliamentary language against the rebel Sena leaders. He said”40 MLAs in Guwahati are living corpses; their souls are dead. Their bodies will be sent directly to the Assembly for post-mortem when they come back. They know what can happen in the fire that has been lit here.”

On Sunday the rebel MLAs led by Eknath Shinde said that they were ready to face a floor test but their faction should be recognized first. They maintained that they will not return to the MVA government of Sena-Congress-NCP – an issue that has been at the centre of the entire crisis.

The Eknath Shinde-led camp has also moved the Supreme Court against the disqualification notice issued by the Deputy Speaker. The rebels have also challenged the appointment of Ajay Chaudhary as leader of Shiv Sena’s Legislature Party. 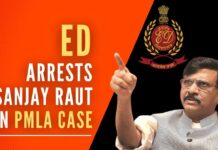 Arnab Judgment – Supreme Court highlights the importance of liberty and...