HAM chief demands fund of Rs.1000 cr from Nitesh, threatens to withdraw support from NDA if not provided

Hindustani Awam Morcha (HAM) president Jitan Ram Manjhi on Tuesday “threatened” to withdraw support from the Nitish Kumar-led Bihar government if the Janata Dal-United (JD-U) leader does not sanction Rs.1,000 crore for the development of the constituencies of the former chief minister’s party.

Addressing a gathering at Mahua block in his own assembly constituency Imamganj in Gaya district, Manjhi said: “If Nitish Kumar does not give me Rs.1000 crore for the development of the party’s constituencies in Bihar, we are free to make a decision. We are not in his party; we are in the coalition of this government… and we can make our party separate from this coalition.”

“Nitish Kumar does not ignore me. He always listens to me and I am sure that he will sanction the said amount for the development of our constituencies,” he added.

Bihar Assembly has 243 seats out of which a majority of 122 are required to form the government. The support of Manjhi’s party plays a key role in the government that has 127 members including 74 of the Bharatiya Janata Party, 45 of JD-U, four of HAM, three of the Vikassheel Insaan Party, and one independent candidate.

The HAM has four seats in Bihar Assembly. It is one of the parties which is part of the coalition government of the NDA in the state. If Manjhi withdraws support from the NDA government, it will stand at just one seat above the majority mark.

Devotees equate the tax imposed by the Bihar government on temples to ‘Jizya’, demand complete rollback Why is CBI delaying probe on the mysterious death of Sushant Singh Rajput? 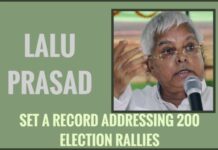 Know Kalyanam, the last Personal secretary to the Mahatma