[dropcap color=”#008040″ boxed=”yes” boxed_radius=”8px” class=”” id=””]T[/dropcap]his is a MayDay call from the Hindus of Kerala. The State once described as God’s Own Country has turned out to be Hell of Devils. Team PGurus recently reported that it is danger to be Hindu in Kerala as the ruling CPI-M has unleashed a reign of terror to annihilate Hindus with the active cooperation of Islamic Jihadists. About 20 Hindus have been executed by the hired killers of the CPI-M during the one year rule of Pinarayi Vijayan, a Marxist.

Many policemen were beaten up by the mob in spite of the police resorting to water cannons and bursting of tear gas shells.

The incidents of last one week in Ernakulam district prove beyond doubt that Islamic Jihadists are having a free run in the State. Not only Hindus, even Judges of the High Court who deliver judgements which are not to the liking of the Islamic terrorists are also being targeted in the State.

Though it was known that Jihadi elements are terrorising the State for the last decade, a Kerala High Court verdict delivered on May 24, 2017 declaring null and void the forced religious conversion and marriage of Akhila, a Hindu medical student from Kottayam, antagonised the Islamic extremists. For the first time in India, an umbrella organisation featuring various Islamic elements staged a march to the Kerala High Court at Ernakulam on May 29 which literally brought the commercial capital of Kerala to a grinding halt.

The organisation named Muslim Ekopana Samiti (Malayalam for Muslim Liaison Committee) which has various pro-IS and pro-Lashkar-e-Taiba elements among others as constituents raised threatening slogans against the two judges who constituted the Division Bench which declared Akhila’s religious conversion and marriage null and void. Though the police tried to prevent the Islamic extremists by barricading the entrance to the High Court buildings, the violent mob over powered the police and threw away the barricades. Many policemen were beaten up by the mob in spite of the police resorting to water cannons and bursting of tear gas shells.

[dropcap color=”#008040″ boxed=”yes” boxed_radius=”8px” class=”” id=””]T[/dropcap]hey shouted provocative slogans, challenging the authority of the Indian judicial system to pronounce a verdict which is not in compatible with the Islamic Sharia. The mob declared that they would physically assault the judges K Surendra Mohan and Abraham Mathew. The Islamic jihadists cast aspersions on Surendra Mohan and described him as a Sanghi (related to Rashtriya Swayamsevak Sangh (RSS)). It turned out to be that Surendra Mohan is a devout Christian with no known leanings to any Hindu organisations.

Though Kerala is infamous for Love Jihads, which saw Romeos belonging to various Islamist organisations selectively targeting Hindu girls for religious conversion posing as their lovers, the new trend is to deploy women jihadists to attract the girls to Islamic centres.

The self styled secular newspapers in Kerala, including Mathrubhumi and Malayala Manorama which do not waste a single opportunity to ridicule Prime Minister Narendra Modi and the RSS chose to black out the High Court March staged by Islamic fundamentalists and the untoward incidents on May 29. The Social Democratic Party of India, an Islamic extremist outfit which is credited with chopping the hands of a Malayalam professor for alleged blasphemy, is the main constituent of the Muslim Liaison Committee. As a follow up to the May 29 march to the High Court, the MLC declared a total shut down in Ernakulam district on May 30 to protest against the ‘police action” of preventing them from entering the High Court premises. The district, which is the commercial capital of the State wore a deserted look on May 30 as shops downed shutters and vehicles keeping off the roads.

The incidents were the culmination of a year-long legal battle waged by Asokan of Kottayam district. Akhila,daughter of Asokan was kidnapped by a Muslim woman by name Zainaba from the medical college where the former was a student. Zainaba is believed to be an IS agent recruiting Hindu girls for conversion as well as recruiting them to be deputed to Syria as Jihadi suicide bombers.

Though Kerala is infamous for Love Jihads, which saw Romeos belonging to various Islamist organisations selectively targeting Hindu girls for religious conversion posing as their lovers, the new trend is to deploy women jihadists to attract the girls to Islamic centres. Zainaba befriended Akhila and took her to Sathya Sarani in Manjeri, a centre of religious conversion.

[dropcap color=”#008040″ boxed=”yes” boxed_radius=”8px” class=”” id=””]S[/dropcap]ources close to Akhila’s father Asokan told Team PGuru that Zainaba had succeeded in making the former a drug addict. “This was followed by indoctrination and Akhila was taken to Manjeri in Malappuram district for complete conversion to Islam. When Asokan pleaded with his daughter to come back , she demanded that they too get converted to Islam. Zainaba was planning to send Akhila to Syria as an IS activist to attend to the needs of the Malayali IS activists fighting there,” said the source.

Asokan had approached in January 2016 Kerala High Court with a habeas corpus petition. What followed was a legal battle with the Islamists trying to prevent the court from proceeding with the case. Taken aback by the intransigent attitude of the Islamists, the court entrusted the deputy superintendent of police of Perinthalmanna with the task of finding the truth behind the kidnapping and religious conversion of Akhila. But the DySP who himself is an Islamist submitted a report to the court in which he gave a clean chit to the Islamists. Meanwhile the Islamists held the marriage of Akhila with a Muslim youth and applied for the marriage registration certicficate to the village panchayath council. Following a plea by Asokan, the court asked the panchayath council not to issue the marriage registration certificate without the concurrence of the court.

Following a detailed hearing, the court on May 24 pronounced the religious conversion and marriage of Akhila null and void. The court ordered the girl who had been asked by the court to stay in a women’s hostel to accompany her parents.

This infuriated the Islamist elements in the State who consider them as a law unto themselves. Abdul Razack Moulavi and V K Showkat Ali, two Islamic exremists masquerading as human right activists called for the impeachment of the judges. The Islamists called for a total shut down on May 30 in Ernakulam district to warn the police which had the audacity to try to barricade the entrance to the High Court while the extremists were staging a march to the court.

“It is clear beyond doubt that Kerala has been Talibanised. If anyone dares to question the Islamists, it is certain that the extremist elements would finish them off. The police has been told by the chief minister’s office not to take any action against Islamists,” said a senior police official . 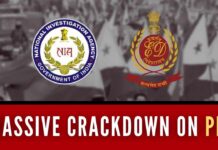 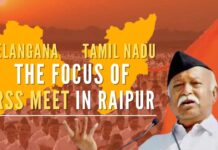 Telangana, Tamil Nadu will be the focus of the RSS meet in Raipur on September 9

Style must accompany substance: A time for transformational leadership