Recently, I came across a review on The Hans India “Exploring the other side” of a book titled “Hyderabad 1948; An Avoidable Invasion” written by Syed Ali Hashmi. According to The Hindu dated 18 May 2017, “the book gives details of the dialogue held between the representatives of the Government of India and those of the Nizam of Hyderabad, the economic sanctions imposed by India and the treacherous role played by the persons holding key positions in the Nizam’s State.”

Reading the review, one would get the impression that the whole and sole purpose of the book is to denigrate the legitimacy of Operation Polo / Police Action labelling it as subterfuge, coercive military action that led to the integration of a “flourishing and advanced” princely state of Hyderabad in the Union of India. The authors themselves use the following words, “a vigorous attempt to bring into focus, nefarious designs of powers that be, to annex by hook or crook, a flourishing and advanced Princely State into the Union of India.”

It goes on to vilify the stalwarts of India’s Independence movement and national integration such as Sardar Patel and K M Munshi and even Pt. Jawaharlal Nehru and Maulana Azad. Ironically, the book released under the aegis of Society of Promotion of Tolerance (SoPT) vilifies Pt. Jawaharlal Nehru, otherwise considered a paragon of virtue especially by proponents of the ‘idea of India’ or the ‘Intolerance’ brigade that mushroomed soon after Narendra Modi became the Prime Minister of India. It makes an unsubstantiated quote attributed to Former British PM Winston Churchill equating “Nehru’s language on Hyderabad with that of Hitler before the invasion of Austria and Czechoslovakia.”

The review finally concludes with what is in the author’s opinion, the reason the book is a must read. He writes: “how History is being deliberately distorted in these days of growing greed for power, disharmony and intolerance.”

Let alone rewriting history, the current BJP government has not succeeded in writing a word in or out of official history textbooks!

All these accusations, while in three and half years, all the BJP Government has managed, is to draw insinuations from the opposition, the left, the communists and the islamofascists, for non-existent intolerance. This narrative comes from a group promoting a warped idea of India where Hindus don’t exist or matter. Let alone rewriting history, the current BJP government has not succeeded in writing a word in or out of official history textbooks!

The sad state of affairs is that History continues to be rewritten to suit the narrative of Islamofascists and that the BJP Government is pinned to ground defending itself for rewriting History.

The moot point is if BJP Government can protect Hindu interests or the integrity and unity of India. 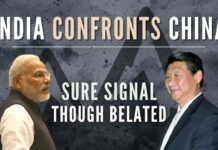