If the year 2017 ended on a bloody note in Kashmir valley the first day of the new year 2018 sent shivers down the spine of security forces with the emergence of Kashmir valleys own ‘fidayeen crop‘.

It is for the first time in the last eighteen years two homegrown fidayeens (member of a suicide squad) managed to breach the perimeter security of a vital security installation and launched an audacious strike killing five jawans of central paramilitary force inside their Lethpora based command training centre in South Kashmir’s Pulwama district.

Prior to this in 1999 when fidayeens had struck at the main gate of the Badamibagh based 15 Corps headquarters in Srinagar one of the local militants had blown himself up after ramming the car in which he was travelling with the main gate.

In all these years local militants carried out major strikes/attempted suicide missions but there is no documented incident where they had launched a similar strike and engaged security forces for such a long duration. The operation which started on the eve of New year culminated after 37 long hours on January 1, 2018.

In the past major fidayeens strikes have been carried out by Pakistan based foreign terrorists belonging to Lashkar-e-Toiba and Jaish-e-Mohammad.

Jaish-e- Mohammad Chief Maulana Masood Azhar, after released from jail in exchange of hijacked passengers of IC814 Air India, had played a crucial role in indoctrinating youth to launch these strikes on vital army installations across the state.

Barely hours after the killing of two out of total three terrorists involved in the fidayeen strike on Lethpora based CRPF training centre located in South Kashmir district of Pulwama an eight-minute video of a 17-year-old Fardeen Ahmad Khandey, son of a state policeman, surfaced on different social media platforms across Kashmir valley.

Fardeen had gone missing from his home in September 2017.

In just three months time he received hardcore training and became part of the three-member fidayeen squad to launch an ‘audacious‘ terror strike against the security forces.

Dressed in a traditional Kashmiri pheran, head scarf placed on his head, assault rifles and ammunition spread around him, 17-year-old Fardeen Ahmad Khanday, was seen making the passionate appeal to the fellow Kashmiris to “join the fight against Indian aggression”.

In his opening remarks, he is seen making it clear to his audience “by the time the video is released I would be in paradise.” 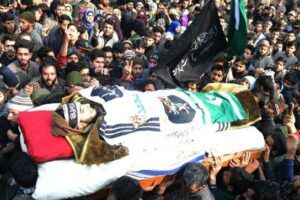 The video was purportedly released by the publicity wing of Jaish-e-Mohammad militant outfit to confuse security forces about the exact number of trained fidayeens roaming freely in different parts of Kashmir valley to take on the fight.

Asking the Kashmiri youth to join him, Fardeen said that there is “no freedom without sacrifice”. In the video, he claims that Jaish attacks have unnerved the forces and that Jaish will continue to launch more attacks like Nagrota, Pathankot and Tangdhar.

Speaking in local Urdu, Fardeen who was from Tral in south Kashmir insists that the “rise of militancy has nothing to do with unemployment as being portrayed by India, but a reaction to Kashmir’s occupation by India’’.

“Kafirs (non-believers) have occupied our land, the modesty of our women is at stake, so Jihad becomes our duty…. The youth of Kashmir please realise your duties and join the fight for Azadi,” he says in the video which has gone viral in the last 24 hours.

Fardeen talks about the demolition of Babri Masjid, attacks like Pathankot, Tangdhar, Pulwama police lines among others and urges Indian Muslims to join the ranks of militants. “Even after repeated claims that Jaish-e-Mohammad is finished in the valley, I want to tell everyone it is impossible to stop Jaish-e-Mohammad now’’.

State DGP Police Dr SP Vaid in Srinagar said, “the participation of two local boys in carrying out the fidayeen attack is not only a challenge but a huge concern for us”.

The other militant was identified as Manzoor Baba (22), who hailed from Drubgam area of Pulwama district. A driver by profession, he had become a militant only two months ago. His name was in circulation last month when his family made a fervent appeal to him to return home. He, however, did not heed his mother’s plea.

For a long time, the senior officers of the Indian army and state police have been raising serious concerns over increasing radicalisation of youth especially belonging to South Kashmir districts in the aftermath of the killing of the poster boy of Hizbul Mujahideen Burhan Wani in a fierce gunfight in July 2016.

At the end of the 37-hour long operation security forces have also recovered an assault rifle with an inscription, “Afzal Guru ka badla”.

Highly qualified youngsters, sportsmen have been roped in by the militant handlers to join the ranks of militancy. Some of them may have returned to the mainstream responding to the passionate pleas of their loved ones especially their mothers but still there is a large number of local youth who have been found missing and undergoing training in training camps before targeting security forces.

If ground reports are to be believed and taken seriously Jaish-e- Mohammad commanders have managed to coerce a large group of radicalised youth from Kashmir valley to launch deadly ‘fidayeen’ strikes to avenge the loss of lives of top commanders during operation ‘all out‘ by the security forces.

At the end of the 37-hour long operation security forces have also recovered an assault rifle with an inscription, “Afzal Guru ka badla”.

Meanwhile, Inspector general of police, Kashmir range Muneer Khan, claimed that the two fidayeen attackers who were part of Lethpora attack were the “ result of indoctrination” and “ some brainwashing” by the slain Jaish- e- Muhammad commander Noor Muhammad of Tral area in Pulwama.

Noor, who had jumped parole, was killed recently in a gunfight at Samboora area of Pampore. He was less than four feet in height.

Fardeen ( 17) and Manzoor Baba ( 22) were lured by none other than Noor himself. They were trained by Noor only. He had a great motivational power and was the main recruiter for Jaish. His job was to make as much recruitment of locals into Jaish as possible,” the IGP said.

He also said that two to four Jaish militants, trained by Noor, are still at large.

Operation all out to continue to restore peace in Kashmir valley: DGP

Operation ‘All out’ launched by the security forces to eliminate militants across Kashmir valley has yielded fruitful results in 2017.

It is a holistic strategy aimed at helping young men to come out of the web of terrorism. It is not an easy way to success, but the attitude, patience and pledge have made our efforts tangible

During the same time, police teams prevented at least 70 youth from joining militancy.

Outlining the achievements of 2017, DGP Dr SP Vaid said the “fight against terrorism will continue till lasting peace is restored in the state”.

“But at the same time, our priority will be to bring the local youth (who have joined militancy) back on the right path. With the collective efforts of parents, civil society and the J&K Police, we have been able to dissuade 70 youth, including budding sportspersons, from joining terrorism,” DGP Vaid said.

The DGP said 206 militants, including 85 locals and 121 foreigners, were killed in 2017. Vaid, however, clarified that “Operation All-out” was not only about eliminating militants.

“It is a holistic strategy aimed at helping young men to come out of the web of terrorism. It is not an easy way to success, but the attitude, patience and pledge have made our efforts tangible”.

At least 31 policemen and 24 civilians were also killed during encounters in 2017.

Senior security experts believe it is too early to comment on the exact number of youth brainwashed by the top commanders but it does not augur well for the Kashmir valley as the outcome of these encounters may further alienate youth from the mainstream.

“Three generations of Kashmiri youth have been raised on these lies through their madrasas and religious congregations further reinforced by money leading to stone pelting and public protests“, experts explained.

Surrendered terrorists to walk away with fat investments in their bank...