In a notification, the MHA said, Zargar alias Latram (52), belongs to Nowhatta in Srinagar and is the founder and chief commander of terror group Al-Umar-Mujahideen and had been affiliated with Jammu-Kashmir Liberation Front. Zargar is currently based in Pakistan. He had gone to Pakistan to obtain illegal arms training and was one of the terrorists released in exchange for the hostages during the 1999 hijacking of Indian Airlines flight IC-814.

The Union Home Ministry said Zargar has been running an incessant campaign from Pakistan to fuel terrorism in Jammu and Kashmir. He has been involved in various terror crimes including murder, attempt to murder, kidnapping, planning, and execution of terrorist attacks, and terror funding said the MHA notification. The Home Ministry said Zargar is a threat to peace, not only to India but across the world, with his contacts and proximity to radical terrorist groups like the Al-Qaeda and Jaish-e-Mohammed and the Central government believes that Zargar alias Latram is involved in terrorism and he is to be notified as a terrorist under the Unlawful Activities (Prevention) Act, 1967.

He is the 35th individual to have been declared a designated terrorist by the government. On April 8, the government had designated Hafiz Talha Saeed, a key leader of Lashkar-e-Taiba (LeT) and the son of 26/11 Mumbai terror attacks mastermind Hafiz Saeed, a terrorist. Three days later, on April 11, Pakistani national Mohiuddin Aurangzeb Alamgir, who was involved in the terror attack on a CRPF bus in Pulwama in Jammu and Kashmir in 2019, was designated as a terrorist.

On April 12, Ali Kashif Jan, the Pakistani handler of the 2016 terror attack on Pathankot airbase, has been designated as a terrorist by the Union Home Ministry. The Act empowers the Central government to notify the name of an individual in its Fourth Schedule if it believes that he is involved in terrorism. 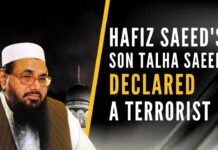