[dropcap color=”#008040″ boxed=”yes” boxed_radius=”8px” class=”” id=””]D[/dropcap]r Swamy39 most sought & heard leaders in India today , his lectures these days are jam packed with enthusiast youth ,women others attending in huge numbers . His popularity growing tremendously with Nation First, INDIA FIRST initiative. The call to take pride with our Culture, tradition, heritage have found a cord with the youth of the nation and they are flocking to hear him and most viewed and liked leader on the net.

Dr Swamy is a firm believer that Economic development based not only on material output and economic services but also on ancient Hindu spiritual values. These values are codified as Santana Dharma. The west world is studying our ancient scripture and decoding it to enhance their overall.

During his initial days of the early 70s’ in Indian politics, when Dr Swamy called for denouncing the Soviet Union economic model and propagated open market economy & Swadeshi Plan, then PM Indira Gandhi called it ‘dangerous” because “much like a Santa Claus . Much Later in 1991 Dr Swamy’s blueprint helped PM PVR Narasimha Rao implement Economic reforms and opened up the Indian market.

[dropcap color=”#008040″ boxed=”yes” boxed_radius=”8px” class=”” id=””]R[/dropcap]eferred as One Man Army, Maverick and precisely Guided missile right on target. His distinction of ousting 2 Govt at the centre. One headed by Indira Gandhi in 1977, which was dictatorial, Anti-democratic and declared Emergency and curbed fundamental rights. He was underground and fought for restoring Democracy. Later most recent in 2014, he is credited to have exposed the UPA Congress Regime for Corruption with his legal acumen and the ruling party lost the election.

1. Daring act during Emergency in 1975:
The then Prime Minister Indira Gandhi had imposed a state of Emergency in India in the mid-1975. Arrest warrants were issued against ministers including Swamy. However, he managed to escape from India and flew to Colombo and onward to United States of America.
Who would dare to step-in to the Parliament on a working day, if he has an arrest warrant against his name? Well, Dr Subramanian Swamy did just that. On 10th August 1976 it took everyone by surprise in the House and once again, donning the disguise of a Sardar (Sikh) he managed to flee India.

2. Access to Kailash Mansarovar Yatra:
It’s not a hidden fact that Swamy’s relations with officials on foreign land have been rock-solid despite drawing criticism within the country.

It was Swamy’s effort in 1981 that he managed for the Hindu devotees to get an access for Kailash Mansarovar Yatra. His meeting with then China’s paramount leader Deng Xiaoping normalized the issue and the pilgrimage route was re-opened.

3. Brain-child of Economic reforms in 1991:
Dr Subramanian Swamy was a member of Planning Commission and Union minister of Commerce and Law during the period of 1990-91. Not many know that the blue-print of the landmark economic reforms was prepared by Swamy and not Manmohan Singh. Swamy prepared it under the prime ministership of Chandra Shekhar Singh but Manmohan Singh only carried it out as a Finance Minister during PV Narasimha Rao’s prime ministership. Senior Congress leader Jairam Ramesh has acknowledged Dr Swamy contribution in preparing the Economic blueprint for implementation

4. The drama by Sonia Gandhi sacrificing PM’s post – busted!
It was widely propagated by a section of media that Sonia Gandhi had sacrificed the post of Prime Minister, but it wasn’t the truth.

Congress President Sonia President after winning the 2004 Lok Sabha Elections had put forward her name to President APJ Abdul Kalam, so as to be the next Prime Minister of India, with a letter of support signed by the party MP’s. But it was Subramanian Swamy’s letter to President that made Kalam persuade Sonia Gandhi to not make her a Prime Minister

5. Electronic Voting Machines’ (EVM) fraud:
Dr Subramanian Swamy demanded an independent committee should be appointed to investigate the authenticity and security of EVMS as they are tamper-prone. Swamy gave the examples of how the United States, United Kingdom, Japan, Germany and Netherlands have abandoned the method and have resorted to paper-ballot system. It was because of Swamy’s efforts that Voter-Verified Paper Audit Trail (VVPAT) was introduced in 2014 Lok Sabha Elections.

6. Exposing the 2G Scam:
Everyone knows that the 2 G Scam under UPA-regime caused a loss of Rs. 1.76 lakh crore to the national exchequer as per a CAG report. Dr Subramanian Swamy was the first person to write to PMManmohan Singh seeking permission to prosecute the then Telecom Minister A. Raja and asked the CBI to come out with a detailed report on the matter. Manmohan Singh took paid no heed to it and consequently Swamy had to file a case himself in the Supreme Court. And the rest they say is history.

7. The Airlines scam in India’s Aviation sector after the 2G license cancellation by SC is also challenged by Dr Swamy in SC. There is a close link between 2G Scam and Airline Scam.

One particular Indian Airlines selling its stake to Middle East Airlines funded by dubious anti-national forces. Also permission to allow 2 JV Airlines to a particular corporate who had initiated Aviation business in India in late 1940 there after its nationalisation vowed never to enter this sector

This deal are viewed as compensating the losses (BRIBE GIVEN TO PRECURE 2G LICENCES ILLEGALLY) incurred due to 2G License cancellation by SC.

9. Taking on Gandhis’ head-on in National Herald Case:
Known fondly for his one-man army antics, Subramanian Swamy has taken on the Gandhi family by himself for years now. Swamy has accused Sonia and Rahul Gandhi, Congress leaders Oscar Fernandes and Motilal Vohra in the funds embezzlement case (National Herald Case). Swamy accused the Gandhis of setting up another company named Young India Company to pay the debt using Congress’ party funds. Now the matter is in Delhi session court with Sonia-Rahul Gandhi and other Congress members appearing as accused, out on bail. The charge will be framed very shortly.
But for now, not letting Sonia Gandhi escape away in National Herald remains the topmost priority.

The latest PT (Patriotic Tweeples) and Virat Hindustan Sangam’ initiative is a small indicator to it. Implementing Uniform Civil Code and scrapping Article 370, Building Ram Mandir at Ayodhya by 2016 -17 are other priorities

11. Successfully saved Ram Sethu being commercially exploited and damaged, destroyed by UPA Congress, DMK Govt during 2005. Single hand fought the case in SC and won the favourable judgement. In the process, Ram Sethu is going to be declared as National Heritage site with historical importance

12. The high profile JJ, CM – TN, dis- appropriate asset case in which she had to go to jail is Dr Swamy fight against corruption and he is the first petitioner in the case. At present matter in SC and final verdict next month.

It’s difficult to tell-all about Dr. Subramanian Swamy’s life in a nutshell but however with a person (politician) being able to do all this in national interests earns respect.

Had Single hand took on & fought UPA Congress might when in power, as one man army, when most of the BJP , opposition leaders kept silent to Sonia Congress UPA corrupt regime was an instrument in its ouster from power in 2014 LS election & BJP, NaMo coming to power. The fear among the opposition, in collusion within till now they managed to keep him out of parliament.

Now with his nomination to Rajya Sabha, one more agenda for Crook Vested Lobby, Corrupt Corporate and all those who have to hide their malpractices to prevent him from becoming Minister, specially FM… They fear of being exposed. 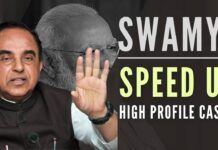 Ind-Pak T20 game shifted to Kolkata, ticketing could be a concern