Military exercise with US: India dismisses China’s objections, says haven’t given a veto to any third country

India on Thursday rejected China’s opposition to the India-US joint military exercise held near the Line of Actual Control (LAC) and said it did not give a veto to any third country on such matters. Hitting back at China, External Affairs Ministry spokesperson Arindam Bagchi said the joint exercises with the US in Auli has nothing to do with the 1993 and 1996 agreements with China and said that the Chinese side “needs to reflect and think about its own breach of these agreements of 1993 and 1996”.

The 18th edition of the India-US joint military exercise ‘Yudh Abhyas‘ is currently underway in Auli, about 100 km from the LAC which aims to enhance interoperability and sharing of expertise between the Indian and US armies for peacekeeping and disaster relief operations. The nearly two-week exercise began last month.

On Wednesday, China said it was opposed to the joint Indo-US military exercises and claimed that it violated the spirit of the two border agreements signed between New Delhi and Beijing. Chinese foreign ministry spokesman Zhao Lijian, while responding to a question from a Pakistani journalist at a media briefing in Beijing on Wednesday, said the India-US military exercise “close to the LAC at the China-India border violates the spirit of the agreements between China and India in 1993 and 1996”. Zhao added, “It does not serve the mutual trust between China and India.”

India has said that China’s People’s Liberation Army (PLA) has violated several border management agreements and protocols by massing troops along the LAC and building infrastructure in disputed regions.

Though the two sides have withdrawn frontline troops from Pangong Lake, Gogra, and Hot Springs and have held almost more than two dozen rounds of diplomatic and military talks. 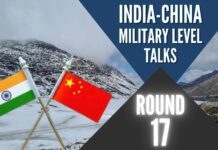 India, China hold 17th round of military talks on eastern Ladakh, days after infiltration attempt by Chinese at Arunachal side Tawang area to be snooped