[dropcap color=”#008040″ boxed=”yes” boxed_radius=”8px” class=”” id=””]W[/dropcap]orldwide the technology giants are set to take advantage of the benefits of Artificial Intelligence (AI) in day to day lives, be it taking care of businesses or satisfying personal needs. India appears to be slow and unwilling to jump into the bandwagon.
In a sign of how important Google views AI technology, the company has recently announced that its AI chief John Giannandrea will take charge of ‘Google Search’ from the soon-to-retire Amit Singhal, who currently occupies the position. There is expected to bring synergy between its ‘AI research’ and ‘Google Search’ business.
AI has arrived. Amidst the entire hullabaloo over machines acquiring near-human intelligence, is India ready to embrace the change?
“For the Indian market, we might see some serious AI in action around 2020, and by 2025 there should be considerable advancements,” Faisal Kawoosa, lead analyst, Telecoms Practice, at market research and consulting firm CyberMedia Research (CMR), told IANS.
According to Thomas George, SBU Head of CMR, there were several studies projecting AI becoming main stream within five years, and that too appears to be in the high-end segments in the advanced and developed markets and not in India.
[dropcap color=”#008040″ boxed=”yes” boxed_radius=”8px” class=”” id=””]A[/dropcap]ccording to a latest forecast by the research firm MarketsandMarkets, the AI market is estimated to reach $5 billion (₹34190 Crore) by 2020 globally. “The increasing use of machine learning technology in the advertising and media and finance sectors, and the growing demand for AI across diversified application areas are driving the growth of the AI market,” the findings showed.
In India, the top-notch technology companies are yet to make a substantial progress into the business of AI.
While Tata Consultancy Services (TCS) has Ignio — a neural science-based automation platform that optimises IT operations, Infosys has recently launched AiKiDo project that will focus on AI, knowledge-based IT and design thinking to help enterprise clients.
Wipro, on the other hand, has an AI platform “Holmes” — a rich set of cognitive computing services for the development of digital virtual agents, cognitive process automation, visual computing applications, robotics and drones. To fulfil its AI dreams, Wipro recently acquired a strategic stake in Vicarious — an AI company based in San Francisco, California.
But this does not seem enough when it comes to the practical application of AI in the country on a large scale. “Although industry circles have been talking about AI for more than a decade, it is yet to make its mark in India,” George said.
[dropcap color=”#008040″ boxed=”yes” boxed_radius=”8px” class=”” id=””]G[/dropcap]lobally, Microsoft, Google and Facebook are leading the way when it comes to incorporating AI into the workplace – transforming the experience of “machine learning” via “deep neural networks” of hardware and software that nearly approximate neurons in the human brain.
“Machine intelligence is crucial to our search vision of building a truly intelligent assistant that connects our users to information and actions in the real world,” Google said in a statement recently.
John Giannandrea, who led Google’s machine learning efforts and is going to replace Singhal, is applying the technology to products such as image recognition for Google Photos search and the smart reply for Google Inbox.
In a cheer for the AI community, Google’s AlphaGo, a programme of its artificial intelligence arm DeepMind, recently defeated the reigning human champion of Go – a complex Chinese board game that is considered the “quintessential unsolved problem” for machine intelligence.
[dropcap color=”#008040″ boxed=”yes” boxed_radius=”8px” class=”” id=””]A[/dropcap]t Facebook, its CEO Mark Zuckerberg wants to focus on AI and is even thinking of a simple AI to run his home and workplace like the famous Jarvis character in the Hollywood movie “Iron Man”.
According to Chris Bishop, managing director at Microsoft Research, 2016 will be the year of AI. “During 2016, we will see the emergence of new silicon architectures that are tuned to the intensive workloads of machine learning, offering a major performance boost over GPUs (Graphics Processing Units),” he posted.
In his first “Ask Me Anything” session on the social networking website Reddit last year, famed theoretical physicist Stephen Hawking said that we evolved to be smarter than our ape-like ancestors and scientist Albert Einstein was smarter than his parents.
“If they become that clever, then we may face an ‘intelligence explosion’, as machines develop the ability to engineer themselves to be far more intelligent,” he said in reply to a question on the discussion board.
That might eventually result in “machines whose intelligence exceeds ours by more than ours exceeds that of snails”, Hawking answered.
That may be a daunting task for people to absorb. But perhaps human intelligence will evolve to do just that.
Note:
1.(IANS)
2.The conversion rate used in this article is 1 US Dollar = 68.38 Rupees
3. Simple Definition of Artificial Intelligence(from The Mariam Webster Dictionary) is (i): an area of computer science that deals with giving machines the ability to seem like they have human intelligence (ii) the power of a machine to copy intelligent human behaviour 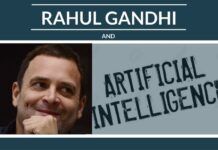