[dropcap color=”#008040″ boxed=”yes” boxed_radius=”8px” class=”” id=””]H[/dropcap]aryana Chief Minister Manohar Lal Khattar has said that, Haryana will figure among the top five states on the aspect of ease of doing business in the next round of rankings.

He was leading a delegation as a part of the road show in Gurgaon for the ensuing `Happening Haryana-Global Investors Summit’ on March 7-8, 2016.

Haryana, which is currently ranked 14th, will figure in the top five states on the aspect of ease of doing business, in the next round of rankings, Khattar affirmed IANS in an interview.

He also said that the BJP government has eased several procedural issues for industries,from the time it has come to power around 15 months back.

While the validity period of approvals has been extended, in several cases self certification has been allowed.

Around 310 points of simplification of procedures were identified and 180 of them have been addressed and the balance 130 would be settled soon.

“Now grant of approvals for industries have been brought under one roof. During the past 15 months a total of Rs.1,300 crore worth of investments have been made in the state,” Khattar added.

This number is however expected to jump manifold at the global investors’ summit.

[dropcap color=”#008040″ boxed=”yes” boxed_radius=”8px” class=”” id=””]”A[/dropcap]lready a Chinese group by name Wanda has expressed its interest to invest around $10 billion in the state to set up theme park and other facilities at Karkonda in Sonepat district. Another Chinese group CFLD too has enquired about land availability,” Khattar said.

On spreading out industrial development across the state which is now in few districts, he said Haryana is divided into four zones – A, B, C and D- and the last one is least developed.

“In the case of D-zone change of land use does not need the government’s approval,” he said while adding that the issue is being addressed by the government.

Apart from an international airport, Haryana wants to develop Hisar as a maintenance-repair-overhaul (MRO) hub for aircraft.

He said the Nuclear Power Corporation of India Ltd (NPCIL) will set up four 700 MW atomic power plants in the state.

Expressing satisfaction on the crime rate in the state Khattar said the government is focussing on women’s safety.

[dropcap color=”#008040″ boxed=”yes” boxed_radius=”8px” class=”” id=””]K[/dropcap]hattar said the state has a land bank of around 10,000 acres and land acquisition is not a problem as farmers are also willing to give their land for industrial use.

Khattar said the government will soon come out with a new IT policy to develop IT and IT-based industries.

He said a Skill Development University is also being set up in Haryana.

According to him, the government will constitute an Economic Advisory Council, with CEOs and promoters of companies as members.

The Central Government has notified Gurgaon, Manesar, Bawal area and Panchkula as well as Barwala as a Brownfield cluster.

On the development of the road network, he said the Western Peripheral Expressway would be constructed at a cost of Rs 4,115 crore.

Khattar spoke of a special purpose vehicle (SPV) for mass rapid transport, under which the Haryana Mass Rapid Transport Corporation has been formed to make the mass rapid project functional.

The state government will also sign a MoU with Indian Railways for setting up a train coach factory. 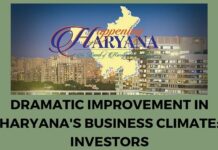