[dropcap color=”#008040″ boxed=”yes” boxed_radius=”8px” class=”” id=””]H[/dropcap]aryana, which was rocked by violent protests till less than a fortnight ago during the Jat agitation for jobs and educational quotas, casuing loss of lives and massive damage to property, drew a series of reassuring messages on Monday from both foreign and domestic investors gathered at the ‘Happening Haryana Global Investors’ Summit here.

Here are some of the comments:

“We have witnessed unprecedented improvement in the ease of doing business in Haryana due to the state’s new industrial policy. The progress made in Manesar bears testimony to it.”

“The fact that 12 countries are taking part in the Summit is testimony to the global confidence that Haryana enjoys as favourite investment destination for the global business community as well. CII would like to partner with Haryana government and pledge to work in the social development sector for projects such as Beti Padhao-Beti Bachao and to empower citizens of Haryana.”

[dropcap color=”#008040″ boxed=”yes” boxed_radius=”8px” class=”” id=””]”W[/dropcap]e have had the best experience of setting up the healthcare facility in Haryana during the last 10 years, especially the support from the people, political leadership and the civil administration. Medanta looks to invest in a medical school and another 1,000 beds over the next five years.”

I am a proud son of Hisar (Haryana). I believe the Happening Haryana event is the harbinger of better times for the state.

“The Fortis hospitals in Gurgaon cater to 35 percent of the international medical tourism demand. We thank the Haryana government for its support.”

With support of the Manohar Lal (Khattar) government, Lotte set up a confectionery factory in Rohtak, and is doing very well. We are now looking at developing smart cities and setting up an industrial township, an entertainment hub and venturing into real estate”.

“We have seven real estate projects in the state. We are looking forward to setting up more in the near future.”

[dropcap color=”#008040″ boxed=”yes” boxed_radius=”8px” class=”” id=””]”H[/dropcap]aryana has played a critical role in making Maruti Suzuki’s market capitalisation bigger than Suzuki, its Japanese parent. For Suzuki, Haryana and India have become important to Japan than Japan itself”.

“We have been deepening our roots in Haryana through diversification into renewable energy, healthcare, realty, etc. We’re very excited about this next phase of growth.

“We will invest Rs.550 crore in Haryana in the field of food processing.”

“I salute the state of Haryana, which, having less than two percent of India’s population, accounts for 10 percent of the armed forces strength. The state with just 1.5 percent of the country’s geographical area is the second largest contributor to the central foodgrain pool. Wheat storage silos built by Adani Group and the Inland Container Depot are testimony to our progress in Haryana.”

Here is an excellent post on Three-day agriculture summit in Gurgaon. 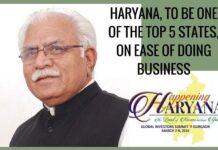 Haryana, to be one of the top 5 states, on ease of doing business