External Affairs Minister S Jaishankar said that India strives to have a relationship with China that is built on mutual sensitivity, respect, and interest. He asserted that betterment and strengthening of the Indo-Pacific is a shared objective of New Delhi and Washington, amid Beijing’s growing military presence in the strategic region.

S Jaishankar was answering questions by Indian reporters on Wednesday as he concluded his four-day visit to the city.

China, which has territorial disputes with many countries in the strategic Indo-Pacific region, has been opposing the US’ proactive policy specifically in the disputed South China Sea.

Responding to a question on how India and the US are planning to handle a belligerent China, he said the two countries have a shared objective of betterment and strengthening of the Indo-Pacific.

He said, “We continue to strive for a relationship with China, but one that is built on mutual sensitivity, mutual respect, and mutual interest. Where Indian and US interests converge, and they do, I think, is on the stability and the security, the progress, the prosperity, and the development of the Indo-Pacific. Because you have seen, even in the case of Ukraine, a war fought a great distance away, has the potential, has the capability of actually creating turbulence across the world in terms of implications for the daily lives of people.”

Jaishankar said the world today is very globalized, extremely interlocked, and interdependent. “It is therefore to say that we have skin in the game is an understatement. I think we have vital stakes today in ensuring that the larger region is stable, that it is secured; that there is cooperation, and that the focus is on the right things,” he said.

To my view, what we have seen in recent years, is an India whose interests and inclinations extend sufficiently eastwards into the Pacific and the United States, which is open enough to work flexibly and comfortably with partners going beyond the orthodox limitations in the past of treaties and alliances,” he said.

Jaishankar said the world has changed and everyone appreciates that no single country by itself can shoulder the responsibilities or the burdens of international peace and the common good.

“To me, in a globalized world, countries are conscious today that the world is not unipolar, it’s not bipolar, they need there to be multiple players, they need to work together, there are common interests at stake out here. The rest of the region actually looks at the more capable countries to pull their weight and work together. I think that’s the kind of situation,” he said.

“India-US is one part of it, we have a bigger gathering, and coordination in terms of the QUAD, but there are still bigger ones. If you look at two new initiatives, the Indo-Pacific Economic Framework and the Indo-Pacific initiative for maritime domain awareness, they extend beyond them. They are open and they have multiple players out there,” he noted. 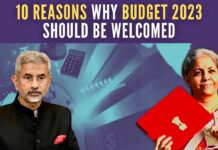 It’s too early to draw the conclusion on Pak :Rajnath