[dropcap color=”#008040″ boxed=”yes” boxed_radius=”10px” class=”” id=””]C[/dropcap]hennai, Dec 15 – The much-awaited nuclear insurance pool to provide insurance cover to the Nuclear Power Corporation of India Ltd (NPCIL) against public liability is yet to take off with the atomic power plant operator wanting the insurers to change the terms, a top industry official said.

“The insurers have designed the policy and the IRDAI (Insurance Regulatory and Development Authority of India) has also approved this. However, NPCIL wants some conditions to be changed and the matter is under discussion,” G.Srinivasan, chairman-cum-managing director, New India Insurance Company Ltd, told IANS.

Sources in the know told IANS that for a premium of around Rs.70 crore ($10.5 million), a consortium of insurers would provide cover up to Rs.1,500 crore per incident and per year.

In the case of other insurance covers, the sum insured is reinstated on payment of premium as the risk could be spread over thousands of insured. In the case of nuclear insurance there is only NPCIL now.
– NPCIL Spokesperson

The proposed policy would cover the liability towards the public as a consequence of any nuclear accident in the plants covered under the policy and also the right of recourse of NPCIL against equipment suppliers.

“It’s like a floater cover (insurance cover will be for all of NPCIL’s plants). When a nuclear accident happens and the Rs.1,500 crore cover is exhausted, then there will not be any insurance cover for subsequent accidents that might occur during that policy year,” an industry source told IANS.

[dropcap color=”#008040″ boxed=”yes” boxed_radius=”8px” class=”” id=””]W[/dropcap]hile NPCIL wants the risk cover to be reinstated at the same cost, the insurers are reluctant as this would wipe out their balance sheet.

“Insurers do not want to take another risk cover of Rs.1,500 crore for a paltry sum of around Rs.70 crore,” the official said.

According to him, NPCIL is not willing to pay a higher premium as it thinks even Rs.70 crore is on the higher side.

Industry experts say the principle of insurance is spreading the risks of a few over many.

“In the case of other insurance covers, the sum insured is reinstated on payment of premium as the risk could be spread over thousands of insured. In the case of nuclear insurance there is only NPCIL now,” he said.

A breeder reactor is one that breeds more material for a nuclear fission reaction than it consumes.

The central government announced in June the setting up of the Rs.1,500-crore India Nuclear Insurance Pool to be managed by national reinsurer GIC Re.

The GIC Re, four government-owned general insurers and also some private general insurers, have provided the capacity to insure the risks up to around Rs.1,000 crore, with the balance Rs.500 crore being obtained from the British Nuclear Insurance Pool.

The losses or profits in the pool would be shared by the insurers in the ratio of their agreed risk capacity.

Foreign nuclear plant suppliers were reluctant to sell to India, citing the provisions of the Civil Liability for Nuclear Damage Act (CLND) 2010 that provides the right of recourse to NPCIL against the vendors under certain circumstances for compensation in case of an accident.

The insurance pool was formed as a risk transfer mode for the suppliers and also NPCIL.

All the 21 operating nuclear power plants in India owned and operated by NPCIL are expected to come under public liability insurance cover, which will also extend to the 1,000 MW plant at Kudankulam in Tamil Nadu built with Russian equipment.

Insurers would like to issue a single policy covering all the 21 units, including the one in Kudankulam. The premium will be paid by NPCIL and the policy will be issued in its name. National Insurance ready to list in the Stock Market, if allowed 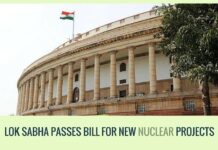