Bad news for the debt ridden Essar Group. Essar Oil’s 13 billion dollars joint venture with Russian conglomerate Rosneft has been finally objected to by India’s Intelligence Bureau (IB), citing security concerns. A few days back the IB informed Union Home Ministry (MHA) that the Vadinar port in Gulf of Kutch where Essar-Rosneft project is supposed to operate is very near to Pakistan’s Defence establishments. Hence it is not advisable to operate in such sensitive areas, said the IB report submitted to the MHA.

Strategically located at the southern tip of the Gulf of Kutch, Vadinar port consists of a marine terminal, crude, product and intermediate storage tanks with over 3 million cubic meter capacity, and rail and road gantries with 13 km of a railway siding.

This is a double whammy for the huge debt ridden Essar Group. On Monday, the Gujarat High Court had rejected Essar Group’s petition against Reserve Bank’s Bankruptcy Order. The law “certainly makes it clear that, now, RBI has such powers to issue certain directions to certain banks and banking companies so as to see that there is a proper recovery of public money or for any other such purpose,” Justice SG Shah said in his order.

Ruias were hoping to clinch Essar Oil’s 13 billion dollar worth with the Russian company. Regarding the objections flagged by the Intelligence agencies, it is believed that the final decision will be taken by Prime Minister’s Office on the viability of this Oil project. This Russian venture, considered to be one of the largest foreign investments in the country, was signed in the presence of Prime Minister Narendra Modi and Russian President Vladimir Putin on the sidelines of the BRICS summit held in Goa last year.

An Essar spokesperson said that all requisite approvals from the Union Government for the Essar Oil transaction to proceed are available. “The query pertaining to seeking MHA’s approval for the port has nothing to do with the present Essar-Rosneft-Trafigura-UCP deal,” the spokesperson said in response to a query from the news agency PTI. Meanwhile, many Essar top officials accuse their Indian rivals of throwing a spanner in their project.

The deal covers Essar Oil’s 20 million tonne refinery at Vadinar in Gujarat and its retail outlets for which the Russian consortium will pay USD 10.9 billion (around Rs 70,000 crore). The consortium, comprising of energy giant Rosneft Oil Company, commodities trader Trafigura and private investment group United Capital Partners, will pay another USD 2 billion (around Rs 12,000 crore) to buy Essar’s port in Vadinar which has the capacity to handle 58 million tonnes of crude a year.

Strategically located at the southern tip of the Gulf of Kutch, Vadinar port consists of a marine terminal, crude, product and intermediate storage tanks with over 3 million cubic meter capacity, and rail and road gantries with 13 km of a railway siding. These facilities are critical to the successful operation of Essar’s Vadinar refinery.

More than 3,000 vessels have been berthed at the Vadinar port since it started operations more than a decade ago, in September 2006. 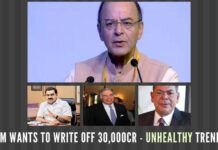 Why is Finance Minister Arun Jaitley keen to save Adani, Tata and Essar power companies from Rs.35000 crores dues?

Shoppers , please keep away from T Nagar: You may be...