What is happening between the J&K parties after the Modi-Kashmiri separatist meet?

The June 24 meeting between PM Narendra Modi and Farooq Abdullah-led “Gupkar gang” and others have hurt the Kashmiri parties[1]. It hurt Kashmir’s oldest religio-political outfit National Conference (NC) the most and clearly suggested that the Gupkaris and others were treading diametrically opposite paths.

Actually, the two main Gupkaris – Farooq Abdullah and Mehbooba Mufti – were at daggers drawn even before the commencement of the much-hyped meeting. It was Farooq Abdullah, who reached New Delhi on June 24, who gave everyone to understand that all was not well with the People’s Alliance for Gupkar Declaration (PAGD). When asked by the waiting reporters if he endorsed the Mehbooba Mufti’s suggestion that the PM must talk to Pakistan[2], the visibly upset Farooq Abdullah said: “Why should I say what she said; her agenda is different and my agenda is different”. It bears recalling that the highly radicalized Mehbooba Mufti had made a pro-Pakistan statement in the very presence of Farooq Abdullah on June 24 and that too at the Gupkar residence of the PAGD chairman.

Muzaffar Baig had upset all from Kashmir by taking a stand on Article 370 that he took. The result was that the offended and wounded Sajad Lone, a votary of Kashmiri nationhood, also trained his guns at Muzaffar Baig.

It was in this situation that the meeting between the PM and Gupkaris and others from Kashmir started at about 3.30 p.m. And what happened in the meeting further demonstrated that those who came to New Delhi all the way from Srinagar were a divided house. They made the task of the PM and his Government very easy and smooth.

The case in point is what Farooq Abdullah wanted to say and what Muzaffar Hussain Baig, former PDP ideologue and Deputy Chief Minister in the Ghulam Nabi Azad-led ragtag coalition government, did and said. The moment Farooq Abdullah started talking about Article 370, Muzaffar Baig retorted and intervened. He told Farooq Abdullah that he would violate the Supreme Court direction if he spoke against the abrogation of Article 370 or if he made any comment on it as the matter was sub-judice. And that changed the whole scenario. Thereafter, Farooq Abdullah didn’t even once refer to what the Modi Government had done on August 5, 2019. He only informed the PM that the people of J&K were unhappy. Mehbooba did refer to Article 370 but indirectly. In short, Baig punctured Gupkaris’ 7-point divisive agenda and created a very difficult situation for Farooq Abdullah and other Gupkaris. At the same time, Baig tried to push his own agenda: He urged the PM to think about Article 371 and apply it to the UT of J&K in such a way that none from outside J&K could buy land or obtain a job in J&K. In other words, he urged the PM to apply the abrogated Article 35A in the form of Article 371.

That the PM and Home Minister Amit Shah gave nothing whatsoever to the Gupkaris and others and that they only talked delimitation, election and restoration of statehood “at an appropriate time” was admitted in public print by none other than the PAGD spokesperson and CPIM State Secretary M Y Tarigami. He said in Delhi: “We came to Delhi with high hopes but are returning to Srinagar empty-handed”.

And in Srinagar, two senior NC activists – former High Court Judge and MP Hasnain Masoodi and three-time MLA and Shia leader Ruhullah Mehdi – pounced on Farooq Abdullah, Omar Abdullah and others from Kashmir but without naming them. MP Masoodi termed the “sub-judice” argument as “spacious and evasive” to avoid taking a stand on “revocation of the special status of erstwhile State of J&K”. “The perpetrator of an unconstitutional act, notwithstanding challenge to the act, is always free to reverse the decision and restore the majesty of law and constitutional supremacy. It also does not either forbid a person, group of persons or a political party from articulating its viewpoint or taking a stand on the matter,” he said.

The sooner they did so, the better for Jammu’s socio-economic and political health.The June 24 meeting between PM Narendra Modi and Farooq Abdullah-led “Gupkar gang” and others have hurt the Kashmiri parties.

The NC MP also reminded his party leadership and others that “pendency of as many as 144 petitions against Citizenship Amendment Act (CAA) did not make political parties feel dissuaded from making CAA an election issue, vocally opposing the CAA in the poll campaign and promising ‘no CAA in Assam if voted”. He further said: “Kerala and West Bengal assemblies during the pendency of the challenge to CAA even passed resolutions against CAA and NRC…People are not so gullible as the leaders believe and do very well understand the game plan”.

And what did Ruhullah say while tearing into Abdullahs and others? He, among other things, said: “We lost that opportunity because the Kashmiri politicians self-cornered themselves for the reasons best known to them. They were apologetic before, during and after the meeting. These parties have self-cornered themselves. They lost an opportunity…One should take inspiration from Mamata Banerjee. She stood strong and fought back and is fighting back…This meeting was, as I had predicted, like all past engagements between Delhi and Srinagar, which have been beneficial for Delhi only. PM Modi wanted legitimacy to the August 5 decision and this meeting and its outcome is a great help to that end. J&K got no good out of the meeting. Delhi got more than what it wanted”.

Not just this, angry and outraged Mehdi also said: “The participation in delimitation, which is a product of the act by which the Article 370 was scrapped, would mean giving legitimacy and acceptance to the August 5 decisions which we should be contesting instead of accepting”. Mehdi said that he will leave NC if it contested elections before the restoration of “special status”.

The manner in which NC MP Hasnain Masoodi and former MLA Ruhullah Mehdi tore into and ridiculed their leadership and the tone and tenor of the language that they used must have stung the Abdullahs and further weakened their moral and political authority even within their own outfit. The reasons are not really difficult to fathom.

As said, Muzaffar Baig had upset all from Kashmir by taking a stand on Article 370 that he took. The result was that the offended and wounded Sajad Lone, a votary of Kashmiri nationhood, also trained his guns at Muzaffar Baig. His People’s Conference (PC) said that “Baig’s statements had become an embarrassment for the party and even at All-Party Meet with the PM, he was interrupting those leaders who raised the issue of Article 370”. After distancing itself from Muzaffar Baig, the PC gave everyone to understand that it was all set to withdraw support to his wife Safina Baig, who is chairperson DDC, Baramulla. The fact of the matter is that the PC has disowned Muzaffar Baig.

In the meantime, Sajad Lone also took a line different from the Sonia Congress, Mehbooba Mufti and NC leaders like Omar Abdullah and declared that his party, also called as King’s Party like JK Apni Party of Altaf Bukhari, “would not link elections with statehood”.

It’s hoped that the Jammu-based supporters of Kashmiri leaders, including the Abdullahs, would take note of Kashmir’s changing political scene, equations or otherwise between parties and party politics within the Kashmiri parties, especially the NC, the PDP and the PC, and act accordingly. They would do well to say goodbye to them, stop advocating break-Jammu sub-region ill-conceived concept, reject outright what their Kashmiri masters stand for and preach and amend their “Jammu Declaration” by deleting from it Kashmir and adding in it separate Jammu state watchword; the ultimate object. They need to act as serious political persons taking into consideration the long term interests of the nation and Jammu province to which they belong. The sooner they did so, the better for Jammu’s socio-economic and political health. The June 24 meeting between PM Narendra Modi and Farooq Abdullah-led “Gupkar gang” and others have hurt the Kashmiri parties[1]. 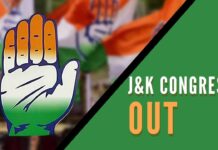 Resignation of Azad and its impact on J&K politics 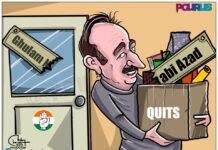