In what must go down as a dubious judgment, Karti Chidambaram, son of the former Finance Minister P Chidambaram’s got interim relief from a Delhi High Court Bench headed by Muralidhar from the arrest of Enforcement Directorate (ED) till March 20. He will be subjected to further custodial interrogation for three days by the Central Bureau of Investigation (CBI) in connection with the INX Media bribe case. Meanwhile, in the trial court, Karti complained that CBI was harassing him by putting strong lights in the lockup while sleeping and waking up often even by 2:30 AM.

During the hearing, Mehta said that Karti’s custodial interrogation was necessary as “new incriminating material” has been found against him.

Karti’s lawyer Abhishek Singhvi on Friday accused the CBI of harassing him and playing tricks to increase the duration of custody. He said CBI purposefully did not file a reply to the bail petition. Singhvi said Karti’s Blood Pressure (BP) levels are fluctuating between 140 and 190. He also said that Karti is having BP related problems producing his treatment certificates.

Countering Singhvi, Additional Solicitor General (ASG) Tushar Mehta said that Karti may be given room instead of lock up and lights can’t be switched off due to security reasons. He said Karti is very healthy and need six days for custodial interrogation. Chidambaram and wife Nalini was present during the entire proceedings in the court and judge allowed 15 minutes interaction for them with the son.

During the hearing, Mehta said that Karti’s custodial interrogation was necessary as “new incriminating material” has been found against him. He said a Compact Disc (CD) has been recovered from the office of Advantage Strategies Pvt. Ltd. in Chennai in connection with the case which needed to be sent to the Central Forensic Science Laboratory (CFSL) for examination, adding that he would have to be confronted with the new “incriminating” material found.

“It’s tragic for me (Karti). They have no new reason for my remand. They are inventing one. CBI has to justify remand every day and every minute,” Singhvi said on behalf of Karti. After one hour arguments and counters, Special Judge Sunil Rana extended the custody till March 12 and posted the hearing on bail plea on March 15.

Earlier the trial court had extended the judicial custody of Karti’s Chartered Accountant (CA) Bhaskar Raman for 14 days. Karti told Bhaskar Raman to be “stay strong” in Tamil, while he was taken out of court by ED officials. The court allowed the CBI to confront Karti with his CA Bhaskar Raman.

Meanwhile, in the morning Karti got a breather in a money laundering case, with the Delhi High Court restraining the Enforcement Directorate (ED) from arresting him till March 20.  A bench of Justices S Muralidhar and I S Mehta, which heard the matter in a packed courtroom for close to three hours, also made it clear that if the special court grants Karti bail in the corruption case registered by the CBI against him, the ED will not arrest him till the next hearing by the high court.

“If the CBI court grants bail to the petitioner in the CBI case, no coercive steps shall be exercised against the petitioner by the ED under section 19 (Power to arrest) of the Prevention of Money Laundering Act (PMLA),” the bench said.

Legal circles observe this Order passed by the High Court Bench headed by Justice S Muralidhar from preventing ED from arresting a person is a very bad one. How can a person assume that an agency is going to arrest when he is already in the custody of CBI? This seems to be a clear intervention in the Rule of Law and the power of agencies to probe cases and the matter is pending before a trial court. ED has already arrested Karti’s Chartered Accountant Bhaskar Raman who is also a Director of his benami companies.

While the matter was being heard in the High Court, Karti’s parents Chidambaram and Nalini were present the whole time. Are Judgments being delivered on seeing faces? 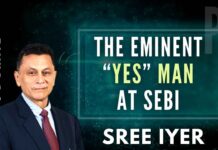