The #MeToo campaign, in which victims come forward and recount the sufferings and humiliation suffered by them at the hands of  ‘Predators’ and ‘sexual perverts’. The campaign hit the South Indian coast exposing the misdeeds of  “self-styled progressive, radical intellectuals” and their carnal escapades.

Vairamuthu has imbibed all the qualities of his mentor and mater who always had an eye for good things in life.

While the Dravidian poet Vairamuthu, the one who literally abused Andal, a Vaishnavite seer who is held in great adoration by Hindus in Tamil Nadu, was exposed by an unnamed woman and singer Chinmayi Sripada, the MeToo tornado claimed a Marxist film actor by name Mukesh and a senior journalist, a resident editor of an English newspaper who enjoys a celebrity status in the State.

Vairamuthu is a film lyricist who describes himself as a poet and novelist. Thanks to his closeness to the Karunanidhi clan, he has managed to walk away with the national award for best lyricist eight times. Muthu was awarded the Padma Sri and Padma Bhushan by the President of India under pressure from the DMK. He was using his network of friends and acquaintances for the last two years to get the Jnanapeeth and the Nobel Prize for literature.

The disclosure by a Chennai based journalist Sandhya Menon, who is specialising in women right issues that a friend of her had revealed that Vairamuthu had sexually molested her while she went to work on a project with the film lyricist at the latter’s Kodambakkam residence. While the culturati and glitterati of the Kodambakkam glamour world kept a studied silence over the issue, singer Chinmayi made it known through her micro-blogging site that Vairamuthu is not that pure and innocent. [1]

“The industry knows; the men know. #TimesUp. The time is bloody up,” Chinmayi tweeted immediately after the news about Vairamuthu molesting the anonymous girl went viral. But this was just the beginning of an avalanche of allegations against the self-styled poet, for whom Muthuvel Karunanidhi was a God incarnation. Vairamuthu has imbibed all the qualities of his mentor and mater who always had an eye for good things in life.

Twenty four hours after her first tweet, Chinmayi struck again. This time it was about the prowling poet’s attempt to seduce her while on a music tour programme to Switzerland sometime in 2005.

“We sang. We went to Switzerland. We performed. Everyone left. Only my mother and I were asked to stay back. The organizer (I don’t remember his name) asked me to visit Vairamuthu sir in a hotel in Lucerne.

“I asked why. He told me to cooperate. I refused. We demanded to be sent back to India. He said ‘You won’t have a career!’ My mother and I both put our foot down, career vendam mannum vendam. Demanded an earlier flight to India and came back.”, tweeted Chinmayi. This time, the predator, who had gone incommunicado since the first tweet had no other option but to come out and answer to the allegations by the singer.

Vairamuthu chose to post a statement in the social media claiming that there were some forces inimical to him working overtime to discredit him because of his stance on various issues. The poet was intelligent enough not to mention the issues but his acolytes took over from where he left and started abusing the Sangh Parivar and Hindutva forces for the allegations made by the women.

While Tamil Nadu coast was shaken by the intensity of the revelations made by Chinmayi and others, neighbouring Kerala saw a tornado in the form of two women in the media world coming out with serious charges against two of the most powerful persons in the State. Mukesh, the CPI-M MLA who is also one of the reigning superstars of the Malayalam film industry is in the eye of a storm as a woman Television professional recounted how the actor tried to molest her using his clout in a TV channel. “It was during the shoot of the Malayalam version of “Kaun Banega Crorepati”.  Mukesh Sir was the anchor person and  I was one of the producers of the programme. He tried to physically subjugate me by forcing the production company people to get me shifted to a room where he was staying in the five-star hotel. He also tried to misbehave with me and I had a narrow escape,” said the aspiring star.

More shocking was the allegation by a media person by name Yamini Nair[2], against a Kerala chief of the English newspaper.

“This person, who held a senior position with a national daily then, was a teacher-figure for me. He taught me the nuances of writing a report a year earlier at a media centre where I worked immediately after my MCJ course. It was of a big event and he supervised the media centre.

“As a post-graduate in communication and journalism who knew more of theory than practical lessons, I was immensely grateful to whatever I learned from him. And I kept in touch with him after I got a job and moved to Chennai from Thiruvananthapuram,” writes Yamini.

Ramachandran, a widely respected writer, and journalist announced that he has written to the Readers Editor of the said English newspaper, as to why they are not sacking the Resident Editor for molesting the female colleague. “I have written to the Readers Editor. I have asked him this question: while the accused Resident Editor is still in place, the newspaper is regularly publishing MeToo charges against the former Editor of the Asian Age, M J Akbar. Do morality and ethics have a place in your newspaper?” asked Ramachandran. 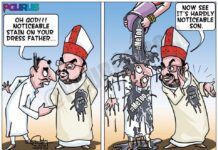