[dropcap color=”#008040″ boxed=”yes” boxed_radius=”8px” class=”” id=””]A[/dropcap] riot of colour and cackle has returned to the wetland reserves of Jammu and Kashmir with the first arrivals of thousands of migratory birds from far off lands this year.

Migratory birds from Siberia, China, the Philippines, Eastern Europe and other areas arrive here every year to spend winter months in the Kashmir Valley to ward off the extreme cold of their summer homes.

“We start receiving the first flights of the avian visitors in the first week of October. The arrivals continue till February,” Imtiyaz Lone, the Wetland Warden of Kashmir, told IANS.

“For hundreds of years, these birds have been keeping their annual tryst with the valley.

“Following the season’s change from autumn to early winter, with an almost arithmetical accuracy the migratory birds land in the Hokarsar Wetland reserve on the outskirts of Srinagar and reserves like Shallabugh, Hygam and Mirgund,” Lone added.

Besides the reserves, migratory birds also throng the Dal Lake, the Wullar Lake and other big and small water bodies.

“We will start receiving greylag geese, wigeons, pochards, shovelers, cormorants and sheldrake ducks by the middle of next month,” the official said.

Besides the migratory birds that come to spend the entire winter in the Kashmir Valley, there are some birds of passage too.

“[dropcap color=”#008040″ boxed=”yes” boxed_radius=”8px” class=”” id=””]A[/dropcap] bird of passage is a migratory bird like the Sandhill crane and the cormorant which arrive in the valley with the beginning of the winter and spend some time before moving down to the Indian plains.

“In the spring months, these birds of passage also spend some time in the valley before moving to their summer homes,” Lone said.

Despite giant strides in navigational technology by humans, Lone says the flight navigation skills of the migratory birds is unparalleled.

“The migratory birds fly in highly disciplined patterns. The eldest of the flock leads the flock like an experienced pilot.

“It is always the elder bird which is assigned the leadership duties during the flight because of its familiarity with the route.

“Imagine, if the leader bird falls sick or gets killed due to some reason during the migratory flight, the next in the line immediately takes over.

“It is like a co-pilot taking charge of a flight in an emergency.

“Each migratory bird species flies separately… The geese fly separately from the mallards and the common teals.

“It is because of this exclusivity of flight that we have phrases saying birds of the same feather fly together,” Lone said.

Under the existing laws of the state, bird shooting is a cognizable offence. But even then it is not uncommon to see migratory birds being sold on the sly in the Kashmir Valley.

“As far as wetland reserves are concerned, there is no question of any poaching,” Lone said.

“The problem arises because the birds leave the reserves for nocturnal feeding to other unprotected water bodies and marshes. It is then that the poachers shoot them.

“Each year, we seize weapons of poachers and charge them with poaching.”

Awareness to protect this fabulous legacy of Kashmir is growing fast, especially among the young.

Dozens of school children visit the Hokarsar Wetland Reserve each week to see the pageant of the migratory birds as they wade and dance in the safety of their protected environment.

“Thankfully, the younger generations of Kashmiris are not given to bird or animal hunting. They see the havoc we have wrought on ourselves by violating nature’s laws of mutually beneficial coexistence”, said Bashir Ahmad War, a retired senior veterinarian.

Lone agrees: “It is because the environment in the valley has become comparatively safer for these birds now that we have some species like the mallards whose small numbers prefer living and breeding here instead of flying back to their summer homes.”

Most wetland reserves and other water bodies continue to shrink because of the people’s greed for land in Kashmir.

The cackle of the migratory birds at night and their brilliant colours during the day beckon us to preserve this fabulous heritage. 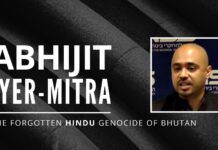 With Abhijit Iyer-Mitra on the forgotten genocide of Bhutan Lalit Modi being used as a diversionary tactic 2 avoid #NHCase:...