They are both of Russian origin and are made in India. Some time next year, a modified combat jet will test-fire a supersonic cruise missile in what will amount to a quantum leap in the firepower of the Indian Air Force (IAF).

This will also make the BrahMos nuclear-capable short-range missile, a joint project between India’s Defence Research and Development Organization (DRDO) and Russia’s Federal State Unitary Enterprise NPO Mashinostroyenia (NPOM), capable of being operated from land, the sea and the air.

India will be only the second Asian country, after China, capable of delivering a cruise missile from the air. According to a defence ministry official, one frontline Sukhoi Su-30MKI combat jet, the most potent in the IAF’s inventory, has already been upgraded for being armed with the BrahMos missile, which has a range of around 300 km and flies at a speed of Mach 2.8 – almost thrice the speed of sound.

Another aircraft is also being upgraded and is likely to be delivered in the first quarter of 2016, the official, who spoke on strict condition of anonymity, told IANS.

According to sources, the modification to the fighter includes hardened electronic circuitry to shield this from the electromagnetic pulse of a nuclear blast.

Along with the aircraft, the missile – whose airframe is built of titanium and high-strength aluminium alloys, giving it a high-speed terrain-following profile – was also modified with a reduced booster and fins for stability.

It can be released from a height of 14,000 metres to 500 metres. After release, the missile free-falls for 100-150 metres, then goes into a cruise phase and finally the terminal phase at 15 metres from the target.

The airborne version of the missile is also lighter than its sea and land counterparts.

An official said a decision on arming other IAF jets with the BrahMos will be taken after the Su-30 tests are done with. However, there is some talk of developing a smaller version of the BrahMos for the Rafale, 36 of which are being bought from France, and the Indian Navy’s carrier-borne MiG-29s.

The proposal for arming the Su-30s was approved by the Cabinet Committee on Security in October 2012 and the IAF is to get over 200 air-launched versions of the BrahMos.

In November, the Indian Army successfully test-fired the BrahMos land-attack cruise missile and in the same month, the sea version of the missile was test-launched from the Indian Navy’s newest stealth destroyer, INS Kochi, and successfully homed in on its target, a decommissioned vessel.

BrahMos is an amalgam of the Brahmaputra and Moskova rivers. 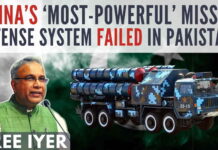 Was the misguided Indian missile a way to test the Pak defense system based on China’s HQ-9? 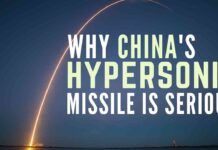 The real reason China’s Hypersonic missile is serious & how the US plans to counter it: Sree Iyer What does the US need to do to catchup with Russia and China in Hypersonic technology: Sree Iyer