Home Politics Moses, Jesus and the Prophet (PBUH): who are they if not self-styled...
Facebook
Twitter
Telegram
WhatsApp

It is an abhorrent state of affairs for the term “presstitutes” to have gained currency in India. (1) Obviously, the term derives from the age-old word for a sex worker. Whatever be the case the community of sex workers do not have to be in the crossfire of such an insult. If at all, they are honest hard working people perhaps fallen on bad times. They do not sell anything that is not theirs. So why should one use a term that will be insulting to a community however degraded their jobs may be, and who are often helpless hard working people? A more appropriate term should be based on an immoral and dishonest profession such as that of a pimp, a broker in sex work, who sells and profits from what is not his / her own (#PimpMedia).

Following some negative headlines in the past few months, relating to Hindu Gurus and Swamijis, there were understandably many criticisms levelled on the tradition. However, given the credibility of the Indian prosecution and criminal law administration system no scrutiny was directed against the system. The media “default stories” were assumed to be true. (2–4)

In this context, a columnist Shoba De writing for the Times of India’s blog started abusing the devotees of Hindu Gurus and Swamijis in the foulest possible language. She called devotees as “bloody gullible”, “monumental idiots”, “suckers/ believers”. To this day she has not been called out for such gutter language that too against innocent devotees. If she was a genuine critique, she should have spared the devotees those abuses. Her track record speaks for herself. Clearly, her anger was directed at the people and their beliefs itself, which is Hinduism. It was an unabashed display of Hinduphobia at its verbal worst.

Did she ever write a word about the Christian Church for its global-scale child abuse of lakhs of children and genocide of hundreds of millions of native Americans, Australians, Africans and Asians, both the phenomenon are not just historic but ongoing? (5–9)

This brings us to the crux of the issue, the systemic problem of overt and internalised Hinduphobia.

Did Moses, Jesus and the Prophet belong to a Mutt or a Sampradaya? What about self-proclaimed and independent churches, church priests such as Paul Dinakaran and Mohan Lazarus in places such as Tamizh Nadu? Are they not self-styled godmen? Is not all Protestant churches’ priests self-styled in the eyes of the Roman Catholic Church, which itself is founded on the “body of Jesus,” a self-styled godman? What about the Pentecostal priests and others without a central church? What about Sufi saints and Ahamadiya seers?

Thus the indiscriminate use of the phrase “self-styled godman” for Hindu Swamijis and Gurujis alone is a deliberate and malicious Hinduphobic act. 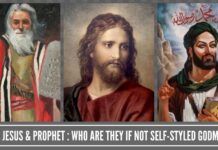 Moses, Jesus and the Prophet (PBUH): who are they if not self-styled godmen? – Part 2