The summit has brought together investors from all over the world for interacting with policy makers, including the political leadership, government officials and, local business leaders on the investment environment and opportunities in Rajasthan.

The state government signed an MoU worth Rs.10,000 crore with Construction Industry Development Board, Malaysia.

[dropcap color=”#008040″ boxed=”yes” boxed_radius=”8px” class=”” id=””]T[/dropcap]”his agreement with Malaysia will give a big fillip to the road development efforts in Rajasthan. The investment will be utilised for the construction of state highways and development of district roads,” D.B. Gupta, Rajasthan’s principal secretary for the Public Works Department, said in a statement.

Another MoU was signed between the Rajasthan government and Bosch Limited to set up facilities for skill training at 33 government ITIs, one in each district. These will be multi skill centres of excellence.

An MoU was also signed between the Rajasthan Housing Board and Singapore Cooperation Enterprise.

As part of the agreement, Singapore will assist Rajasthan to develop two new townships in Jodhpur and Udaipur, with concept planning and infrastructure engineering.

[dropcap color=”#008040″ boxed=”yes” boxed_radius=”8px” class=”” id=””]U[/dropcap]”rban Housing is our core expertise. We have offered better housing every five years to our citizens and will be glad to use our expertise in Rajasthan,” Singapore’s Home Affairs and Law K. Shanmugam said in a statement.

Shanmugam also revealed that Scoot, a group company of Singapore Airlines, would soon commence direct flights between Jaipur and Singapore. 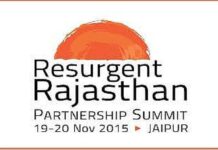 CII would like a ceiling of 10% on customs duty