On Wednesday, the former Maharashtra Chief Minister and leader of the opposition Devendra Fadnavis has been detained by the Mumbai police along with other BJP leaders. The BJP leaders were staging a protest demanding Nawab Malik‘s resignation.

Maharashtra Minister and NCP leader Nawab Malik were arrested by the ED in connection with the Prevention of Money Laundering Act. This came after Dawood Ibrahim’s brother Iqbal Kaskar allegedly revealed certain facts about his sister Haseena Parkar‘s involvement in usurping high-valued properties of innocent citizens in Mumbai.

Nawab Malik is under the custody of ED It is pertinent to note that the MVA government has refused to seek Malik’s resignation even though Malik is accused of serious charges of having connections to terrorist Dawood Ibrahim.

Devendra Fadnavis had also made shocking revelations against the ruling Maha Vikas Aghadi (MVA) government, yesterday in the Assembly and he had handed over proofs to the Assembly Speaker.

He was addressing protesters along with key BJP leaders at the Azad Maidan with the motto ‘Nawab Malik Hatao, Maharashtra Bachao’.

Devendra Fadnavis took to Twitter to share the visuals of the protest at Azan Maidan in Mumbai. He tweeted, “Mumbaikars are out on streets of Mumbai… They are angry, they are hurt. We demand Nawab Malik’s resignation! It’s clear Nawab Hatao Desh Bachao!”

Mumbaikars are out on streets of #Mumbai..
They are angry, they are hurt.
We demand #NawabMalik’s resignation!
It’s clear #NawabHataoDeshBachao !#MVA wake up! @BJP4Mumbai #BJP @BJP4Maha pic.twitter.com/btbNWmYh6f

A few minutes later he tweeted, “We will not stop till traitor who supports terrorists – Minister Nawab Malik resigns… Nawab Hatao Desh Bachao.“

Currently, Fadnavis and other BJP leaders are being taken to the Azad Maidan Police Station.

Earlier, the police had detained him during a protest held by BJP workers in support of the Other Backward Classes (OBC) reservation. The Maharashtra unit of the BJP on Saturday held ‘chakka jam‘ protest across the state to press for its demand of restoring reservation for the OBC in local governing bodies. 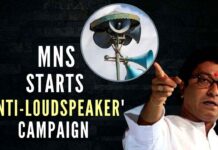