The first version was released in March 2017 and experienced unprecedented success as it was amongst the first in detailing the cozy relationships that exist between Babus, Businessmen and Bent (3B) politicians in India. It was beyond my expectations (the Kindle version was the second highest selling self-published book in India in 2017) and since then a lot has happened that needs to be documented.

NDTV is not an isolated case of the nexus that exists between the 3Bs. This sordid saga of “skullduggery, treachery and venality” which weaves in and out of the “boardrooms to bedrooms” will make your blood boil.

The role of some corrupt ministers in the United Progressive Alliance (UPA) has since come to light and is detailed here. This book proves that Ishrat Jehan report tampering to suit a narrative was not an isolated instance. It is also a chilling reminder of what to expect should some of the parties that constituted the UPA come back to power in 2019. Caveat voter!

The devious ways in which Roy and a few corrupt in the Indian Revenue Service (IRS) cooked up fake cases against an honest and upright IRS Officer S K Srivastava will show the extent to which these psuedo-intellectuals will stoop to get their way.

That NDTV continues to function, with crores owed in taxes and fines is a clear indication that some in the present government are helping it. In my own small way, I have tried to help the discerning reader separate the grain from the chaff.

Buy the book – reading is optional! And thanks for all your support. 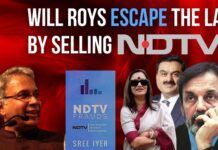