The Nehru government allowed Pakistan to occupy the non-Kashmiri-speaking areas so that Sheikh Abdullah could establish his and Kashmir’s hegemony over Jammu and Ladakh.

Pakistan invaded Jammu & Kashmir in October 1947. The invasion continued till December 31, 1948. That day, the then Indian PM Jawahar Lal Nehru dumbfounded the nation by enforcing unilateral ceasefire. He took this mind-boggling step to please his friend, separatist of separatists, and communalist of communalists, Sheikh Abdullah of Kashmir, so that he could become Sultan of Kashmir and rule the state unhindered and with utmost ease.

Jawahar Lal Nehru enforced ceasefire at a time when the chivalrous Indian Army had the Pakistani invaders, regular and irregular, on the run and it was about to get the aggression vacated.

Even today, the Kashmiri Sunnis constitute not more 22 percent of the state’s total population. Sheik Abdullah belonged to the Sunni sect, which has been at the helm of affairs ever since 1947 when Maharaja Hari Singh acceded Jammu & Kashmir to India. This is also the sect that controls almost all the separatist outfits and the so-called mainstream political parties in Kashmir, including the National Conference, the People’s Democratic Party, the Congress, the CPI, and the CPI-M.

It is a different story that the Sunni leaders in Kashmir sing the monotonous and irritating alienation song 24X7 to mislead the Indian nation and international community and that no one talks about the miserable plight of the people of Jammu province and Ladakh region, who have been suffering huge socio-economic and political losses at the hands of Kashmiri leaders backed to the hilt by New Delhi. People of Jammu and Ladakh are groaning under the yoke of Kashmiri Sunni rule since October 1947. Their life has never been one of political and economic aspirations ever since then. They only get crumbs. Jammu and Ladakh contribute more than 75 percent revenue to the state exchequer every year.

Jawahar Lal Nehru enforced ceasefire at a time when the chivalrous Indian Army had the Pakistani invaders, regular and irregular, on the run and it was about to get the aggression vacated. The ceasefire helped Pakistan to establish its control over the whole of Shia-majority Gilgit-Baltistan region and Jammu province’s Mirpur, Bhimber, Kotli, Parts of Poonch, including Tehsil Bagh, and Muzaffarabad. The total J&K area that Pakistan occupied through rape, murder, loot and plunder with the help of Jawahar Lal Nehru and his Congress Government was 78,114 sq Km.

Jawahar Lal Nehru’s love for Sheikh Abdullah not only helped Pakistan annex one-third of Jammu & Kashmir’s territories, but also helped the invaders convert whole of these areas through conversion, murder, and expulsion of several thousands of Hindus and Sikhs. Not just this, the Pakistani barbarians kidnapped 1,000s of Hindu-Sikh women between October 1947 and 1948 and auctioned them in Pakistani markets, including in towns like Lahore. The fact of the matter is that Jawahar Lal Nehru allowed Pakistanis to do in these areas what the Mughals and Pathans couldn’t do between 1526 and 1819.

It may appear unbelievable or ridiculous, but it is a fact that the whole of this area is non-Kashmiri-speaking. Gilgit-Baltistan is not a home to even one ethnic Kashmiri. The main ethnic groups in the Gilgit-Baltistan region include Shins, Yashkuns, Kashgaris, Pamiris, Pathans, and Kohistanis. And the main languages spoken in this strategic region are Shina, Balti, Burushashki, Khowar, Wakhi, and Domaki.

Shina is the main language in Gilgit. It is spoken in Diamer, Ghizer and Astore, part of Gilgit. Shina is also spoken by some in the Ishkoman Valley, Hunza, Nagar, and Baltistan. Some people in Ishkoman Valley and in upper Hunza Valley also speak Wakhi.

Burushashki is the main language spoken in the Hunza Valley. It is also spoken in Nagar and Yasin. Khowar is the main language of Chitral. As for Balti, it is spoken by the bulk of the population in Baltistan Division. Balti-speaking people are also found in Skardu, Shigar, Rondu, Khapolu, Kharmang, Gultari, and Ganche. The language of Domas of Berichos is Domaaki. Domas are also found in Gilgit and in some Shina-speaking areas of the lower Hunza Valley. Domas are mainly musicians and smiths.

Similarly, Jammu’s Mirpur, Bhimber, Kotli, Parts of Poonch, including Bagh, and Muzaffarabad are all non-Kashmiri-speaking areas. These are Sunni-dominated and they all are Panjabi/Pathowari-speaking people. They inhabit a total land area of 13,297 square kilometers. Muzaffarabad is part of this area. Administratively it was part of Kashmir province, but in terms of ethnicity, language and culture, it was totally different. It would be wrong to say that the people of Muzaffarabad speak the Kashmiri language. The truth is that Muzaffarabad is ethnically, culturally and linguistically 100 percent non-Kashmiri.

It needs to be underlined that as per the Government of India’s records, the total area of the State of Jammu & Kashmir is about 2,22,236 Sq Km. 78,114 Sq Km. is under the illegal occupation of Pakistan and 37,555 Sq km under China. Not just this, 5,180 Sq. Km. of Jammu & Kashmir state was also illegally ceded to China by Pakistan under the March 1963 Sino-Pak Boundary agreement.

It’s time for the Government of India to rectify the mistake and tell the international community that Pakistan couldn’t occupy even an inch of Kashmiri speaking area of the state and that the Nehru government allowed Pakistan to occupy the non-Kashmiri-speaking areas so that Sheikh Abdullah could establish his and Kashmir’s hegemony over Jammu and Ladakh. 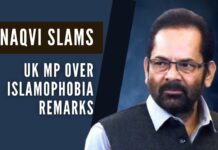 Is Pak’s pappu getting help from Indian pappu on Kashmir?