New age ‘jihadis’ actively involved in militancy-related activities and spitting ‘venom’ against security forces in Kashmir valley are not being manufactured in terror factories across the line of control but they are being ‘indoctrinated’ on various social media platforms. 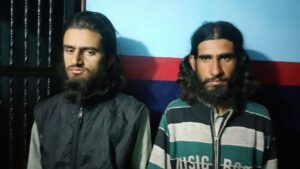 Hundreds of such social media pages are active and full of ‘propaganda’ material which is enough to mould and brainwash the young mind of a misguided youth.

Recently when two cases involving students of Degree college Anantnag and Sixth-semester engineering student of Baba Ghulam Shah Badshah University in Rajouri came to light, the senior police officers and National Investigation Agency took note of growing influence of cyberspace and listed it as a big source of ‘radicalisation’ of youth in the state.

Moving swiftly in the matter, NIA announced crackdown to check the growing influence of these ‘venom’ spitting pages on the young minds of students and misguided youth.

Already a large number of Twitter and Facebook accounts and Groups have been blocked or were in the process of being blocked. About 6386 telephone users were identified, which were being used for fanning extremism and unrest in the Kashmir valley.

According to official sources nearly 125 twitter handlers/tweets, 79 WhatsApp Groups and accounts and 6386 mobile telephones have been blocked, which were spreading highly inflammatory information pertaining to happenings in Kashmir including anti-terror operations and drive against terror funding and hawala operations.

“The Ministries had got reports from several agencies that a large number of Twitter and Facebook accounts were being misused to spread venom among the people of Kashmir and other places by militants, their sympathizers, separatists and some vested interests. The users of these accounts and Groups were being heavily paid through hawala money,’’ sources said, adding that the NIA, which was investigating terror funding and hawala operations and some Intelligence agencies had sounded alert about “anti-national activities’’, which invited action.

Local youth joining ranks of militancy is not a new development in strife-torn Kashmir valley. But ever since security forces neutralised poster boy of Hizbul Mujahideen Burhan Wani South Kashmir districts of Kashmir valley witnessed a surge. It was Burhan Wani who had started the trend of posting small clips of videos with youth dressed in combat uniform holding AK rifles participating in various combat drills and posing before the ‘mobile’ camera.

In the aftermath of the killing of Burhan Wani in July 2016, the street protests were mostly lead by ‘radicalised’ youth who were eager to sacrifice their lives and openly challenged security forces to hit them on their bare chests.

In the month of August 2017, a sixth-semester student of B. Tech (Information and Technology) studying at Baba Ghulam Shah Badshah University (BGSBU) in Rajouri had joined ranks of Zakir Musa’s militant outfit Ansar Ghazwat-ul-Hind.

The breaking news alerted the security establishment to keep a tight vigil on the activities of students studying in prestigious academic institutions.

Hailing from Ahmed Nagar area of Soura in Srinagar the sixth-semester student identified as Mohammed Eisa Fazili was found missing from his hostel room on August 17. Before he went missing he had cleared his sixth-semester examination on July 18, 2017, securing 433/750 marks.

A fortnight ago, another ‘infant terror module’ was busted by the Jammu and Kashmir police

Before the University authorities in Rajouri could ascertain his whereabouts and informed his parents to track him down his pictures holding a rifle in his hand surfaced on the social media pages on August 19.

The message posted on the timeline of a social media page ‘Shariyat ya Shahadat’ read as” Newly joined the ranks in Kashmir. Brother Mohammad Eisa Fazili alias Eisa Ruhullah from Soura, Srinagar. B. Tech student from Ghulam Shah Badshah University. He was also giving lectures from Book of Jihad of Imam Ibn Nuhas Rahimahullah to youth”.

A fortnight ago, another ‘infant terror module’ was busted by the Jammu and Kashmir police after a group of ‘radicalised’ youth hailing from Banihal area of Ramban district in Jammu studying in Degree college, Anantnag was found responsible for targeting Sashastra Seema Bal (SSB) along Jammu-Srinagar National Highway on September 20.

According to police cyberspace is becoming a big source of ‘radicalisation’ of youth in the region.

Inspector General of Police, Jammu range Dr SD Singh Jamwal said during routine surveillance and input gathering we zeroed in on a group of ‘radicalised’ youth who were active in social media. After developing credible information we launched a successful operation and arrested them from Banihal along with the ‘looted’ weapons.

IG, Jammu range claimed, two out of three youth, who was part of the terror module, were third-year B.Sc students of Degree College Anantnag while the third one was employed by the private engineering company engaged for four laning of the Jammu Srinagar National Highway. The students were identified as 21-year-old Gazanfar Iqbal Khan S/o Mohd Yaqoob Khan R/O Kaskoot Tehsil, Banihal. His father, currently working as forest guard was earlier affiliated with Hizbul Mujahideen in the year 1989 and had surrendered before police DySP Muneer Khan in 1990 at Banihal.

Another arrested youth has been identified as 25-year-old Mohd Arif S/o of Ghulam Hassan Wani R/O Asher Tehsil Banihal. Arif was working with the construction company Navayuga and is believed to have facilitated the terror attack.

The third youth involved in the attack has been identified as 21-year-old Aquib Waheed S/O Abdul Waheed Najar R/O Kaskoot tehsil, Banihal. He is yet to be arrested. One of his uncles Mohd Hussain Najar was Divisional commander of Hizbul Mujahideen in 1989. His parents are teachers and one of his younger brothers is a student of IT in Gogjibagh area of Srinagar.