Namaskar. Please like this video and help it spread far and wide.

New York Times continues to play favorites, papering over the fact that their favorite Alexandria Ocasio Cortez (D-NY) had changed her vote from “no” to “present” on the Iron Dome funding bill because of “influential lobbyists and rabbis.”

The article stated that Ocasio-Cortez “tearfully” decided to change her vote after a meeting with her fellow Squad members, which the article initially said, “underscored how wrenching the vote was for even outspoken progressives, who have been caught between their principles and the still powerful pro-Israel voices in their party, such as influential lobbyists and rabbis.”[1]

The online edition took out “such as influential lobbyists and rabbis.” But the print edition still has this. This shows the extent to which New York Times is prepared to twist the narrative. You may ask, “What is the big deal?” Here is the “big” deal – The phrase that got removed is an anti-Semitic dog whistle and could have caused violence against Jews and their places of worship.[2]

So, what is the back story?

If you watch our Daily Global Insights program, you will know that this $1 billion grant to Israel for their “Iron Dome” was voted down as part of a bigger bill, a few days ago by the Congress. At that time, AOC had voted against the bill.

We should all remember that the “Iron Dome” is a defensive measure by Israel to save Israel from rockets/ drones/ any other aerially launched missiles and so on. As soon as the vote failed, the pro-Israel lobby must have swung into action, and then a standalone 1-billion-dollar funding for the “Iron Dome” program was voted upon and it passed 420 for and 9 against.

The second time around, AOC did not vote against the bill but changed her vote to Present (it is neither an Aye or a Nay). In other words, she chickened out – must have been aware of the Jewish vote in her constituency.

So, who were among the nine that voted against the bill? Ilhan Omar and Rashida Tlaib. Who was not there were Pramila Jaipaul, the Chair of the Progressives, and Ro Khanna! Are chinks beginning to emerge in the Progressive camp? Only time will tell.[3]

Thanks for watching and do subscribe to our channel. 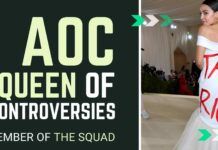 Alexandria Ocasio Cortez or AOC is queen of controversies, says Sree Iyer as he analyses her work 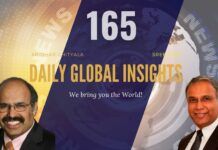 Pt Satish K Sharma on whether Colonialists still have their knee...

Sree Iyer on Kerala Gold Smuggling & Vijayan’s involvement and whether...