Both these caste-based parties have failed to still realise that they live in a new India where the electorate has been increasingly moving away from identity politics and demanding development-oriented politics.

One feels sorry for Akhilesh Yadav. The Samajwadi Party leader was taken for a grand ride by the crafty BSP supremo Mayawati and thereafter dumped unceremoniously. To rub salt into his wounds, the Dalit Ki Beti claimed that his party had failed to transfer its (Yadav) votes on the ground to the BSP candidates. Further, she inflicted more wounds by reminding him that prominent members of his family had lost the election.

Despite the provocation, Akhilesh Yadav remained dignified and accepted the fait accompli of having to contest the forthcoming by-elections in Uttar Pradesh on his own strength and without an alliance with the BSP. He could have called out Mayawati’s lie that the BSP had not gained much from the partnership, by telling her that the BSP had won 10 seats as compared to a big zero in 2014, that her party’s 2014 vote share had remained more or less intact, and that the BSP had triumphed from seats with a considerable Yadav presence. He could have also told her that, on the contrary, it was his Samajwadi Party which had been the loser in the alliance. It could just about retain its five-seat number of 2014, that Mayawati’s backing did nothing to prevent the loss in prestigious contests involving his wife and cousins, and that his party’s vote share of 2014 actually went down in alliance with the BSP.

The BJP dented the SP’s Yadav vote-bank as well as Mayawati’s Scheduled Caste grouping, besides grandly holding on to its non-Yadav OBC and the upper caste support.

But Akhilesh Yadav’s measured response had as much to do with dignity in defeat as it had with the realisation that he had nobody to blame but himself for the mess. He had aligned with Mayawati for the Lok Sabha polls against the wishes of several senior party leaders who had warned him on both her unpredictability and obsession with self. In the course of campaigning, he had completely subordinated himself to her whims and fancies, thus making it clear that she was calling the shots in the partnership. Akhilesh Yadav had gone to the extent of even hinting that he backed Mayawati as a prime ministerial candidate. So blinded was he by his desire to stop Narendra Modi from becoming Prime Minister a second time, that he refused to consider Mayawati’s track record of betraying coalition partners — both the SP and the BJP had in the past been victims.

Instead of mending fences with Shivpal Yadav, his uncle and co-founder of the Samajwadi Party, Akhilesh Yadav directed his energies into stitching an unnatural partnership with the BSP and its mercurial leader. In the process, he not only displeased veterans in the party but also sidelined his father and the party’s tallest leader, Mulayam Singh Yadav, whose heart was clearly not with the alliance. Mulayam Singh Yadav had to undergo the embarrassment of having to appear on stage with Mayawati during an election rally, to project the image of a robust SP-BSP partnership in which the past was forgiven, if not forgotten.

But there is more to the episode than Mayawati’s rant and Akhilesh Yadav’s submission. It lies in the tacit acceptance by both leaders that they were depending on castes as vote-banks to deliver. Mayawati was hoping to add the Yadav electorate to her party’s kitty while Akhilesh was banking on the transfer of Scheduled Caste votes in favour of his candidates. The mathematical calculation did not take into account the possibility of these voters breaching caste loyalty and supporting development. This was different from that of the BJP’s approach, which too had worked out its caste formula but instead of banking on caste identities, it hammered home the point of social welfare schemes positively altering the lives of people, especially those of the non-privileged castes.

The success of this drive is evident from the data that has come into the public domain. The BJP dented the SP’s Yadav vote-bank as well as Mayawati’s Scheduled Caste grouping, besides grandly holding on to its non-Yadav OBC and the upper caste support. The former was possible because the social welfare schemes had benefitted the Scheduled Castes and the OBCs, including the Yadavs. In short, while the BJP’s caste engineering was facilitated by delivery of goods on the ground, that of the SP and the BSP relied merely on identity politics. Both these caste-based parties have failed to still realise that they live in a new India where the electorate has been increasingly moving away from identity politics and demanding development-oriented politics.

Is this the end of the road for the SP-BSP combine? We don’t know since Mayawati has said that the partnership will not hold for the coming by-polls and that if the SP manages to put its house in order, she can reconsider her decision for the 2022 Assembly elections. What is clear is that an alliance based purely on caste arithmetic will be as much doomed as it has been in 2019. 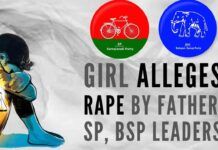 Shocking revelation by a teenage girl: Alleges her father and SP, BSP leaders of rape