The unprovoked shelling in Nowshera may be another attempt to argue Pakistan’s military dominance.

The unprecedented and indiscriminate shelling of civilian areas in Nowshera by the Pakistani Army has forced many to search for this obscure place in their atlases. In so many years of hostilities along the LoC, Nowshera has barely featured a few times in the News, as mostly it has been overshadowed by the high profile combat engagements at Poonch, Uri and Kargil.

Nowshera has a literacy rate of 79%, yet more than 50% of the population lives below the poverty line.

Nowshera is a Sub-District, about 124 km from Jammu on the Jammu-Poonch National Highway (NH-144A) and has about 62,000 souls living in the 58 villages of the Tehsil. But surprisingly it has a 79% literacy rate, which is 20% higher than the National average of 59%; yet more than 50% of the population lives below the poverty line.

It also has its share of our battle ridden history. The battle for the defence of Nowshera in 1948, personifies bravery and the military acumen of Brigadier Mohammad Usman, who did not move to Pakistan after partition when the pre-independence Indian Army was split in two. Usman and his 50th Parachute Brigade repulsed many attacks by Razakars on Nowshera and inflicted heavy losses on the enemy. For his unflinching valour and devotion, he was awarded the Maha Vir Chakra posthumously, and Shri Jawahar Lal Nehru (the then PM) had attended his funeral. Every year on the 8th of February, the city celebrates ‘Nowshera Day’ and remembers the ‘Sher of Nowshera’, a nickname which was given to Brig Usman.

The last few days have been a chilling reminder of 1948 for the locals in the Nowshera Valley. The Army had to rescue more than 200 kids from schools using bullet proof vehicles and about 3,500 people have abandoned their homes and moved to camps in the rear areas. Military analysts and political minds are still guessing the intent behind this unprovoked firing – Is it one of those big infiltration attempts where Pak Army provides fire cover to the terrorists to get across?

In their quest to gain parity against India, to satisfy their egos and to support Sharif, Pakistan Army is playing an exceptionally costly game of men, material and money.

But mostly things don’t square up because it is not in the interest of the Pak Army to escalate fireworks in this sector as Indian posts in Nowshera enjoys better domination and tactically vantage positions; unless they want to purposely aggravate the situation to satisfy their lost pride and oblige Nawaz Sharif…

On 23 rd May ‘16, Indian Army destroyed Pakistani bunkers along the LoC in Nowshera Sector and later gave a video to substantiate their accomplishments. In a major goof up, the official spokesperson of Pak Army, Maj Gen Asif Ghafoor released a doctored ‘video’ on Twitter on 24th May, claiming a befitting response to Indian shelling of the civilian areas in Pakistan. It later became a major embarrassment when international media ran the story of this fake video.

Pakistan Army still lives in a “Martial Race Syndrome”, and the temptation to be powerful than Indian Army is the motivation which drives them. The story of the evolution of Pakistan Army is synonymous with the evolution of Pakistan itself – both suffering an acute identity crisis. Pakistan Army on record admits that its forces are ‘India-centric’, and more often than not, these Indo-Pak clashes along the LoC are methods by which it assures itself of this folly and asserts its misplaced supremacy.

The appalling defeats of 1948, 65, 71 and Kargil still haunts them, and the recent failures to respond to surgical strikes by India rubs it in. Keeping LoC active and Kashmiri jihad alive anaesthetises the deep psyche wounds and gets them the budget they demand. The present situation along India’s eastern borders with China offers an opportune moment to open up a second front and split the Indian Armed Forces.

In all, the unprovoked shelling in Nowshera may just be another attempt to argue their military dominance which is connected to their textbook patriotism and Martial Race Syndrome.

General Qamar Javed Bajwa has gently but firmly carved a niche in the confused political system of Pakistan ever since he was elected to lead the Army in November ‘16. Unlike previous Army Chiefs, he doesn’t have a back ground of the ISI and was considered a dark horse in the race to command the 620,000 strong Pakistan Army. He is relatively amicable and auxiliary in his relationship with Nawaz Sharif.

Having suffered once at the hands of General Musharraf, Sharif’s decision to bring in Bajwa was more based on obedience, than competence.

On 17 July ’17, Pakistan’s Supreme Court resumed the hearing of Panamagate graft case in which Sharif and his children have been implicated by a JIT. His past is chequered with allegations of corruption and sentencing. In April 1993, Sharif Government was dismissed by the President of Pakistan on charges of corruption; and in July 2000, while serving a life sentence for ordering the hijacking of Musharraf’s plane, he was sentenced to an additional 14-years imprisonment for corruption.

Judiciary in Pakistan has exponentially grown in power over the last two decades and Sharif might actually be staring at an impeachment and subsequent jail term for Panamagate. Considering the sensitivity and repercussions of this case, he would like to exploit his equation with General Bajwa and distract public attention by escalating things at LoC. Garnering public support on the pretext of the threat to Pakistan and to Islam has always been a weapon of choice with the political masters in Pakistan.

In their quest to gain parity with India, to satisfy their egos and to support Sharif, Pakistan Army is playing an exceptionally costly game of men, material and money. The speed at which events are moving in Pakistan, it is extremely arduous to predict the future course of events in this conflict. The country as such is plagued by many problems – sectarianism, the assertion of ethnic identity by religious factions, economic crisis and Talibanisation. Pak Army in its pursuit to equal ties with India should not make it more disastrous for themselves.

Vasudha Srivastava
The Author is an army wife who is a keen observer of Indian politics and the Indian Army.

A travel junkie, she enjoys exploring the road untraveled with her husband. 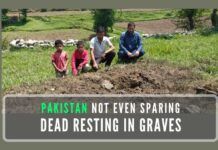 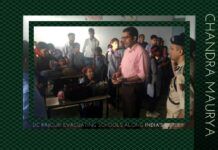 War like situation prevailing in forward areas of Nowshera

MSM gets away with fake news…. again. 48-hour ban imposed and...