Labour up to its tricks again?

The Indian High Commission in London has condemned a debate among some British lawmakers on an e-petition over the right of peaceful protests and freedom of the press in India amid the ongoing farmers’ protest in Delhi. The Indian High Commission said the debate, held on Monday evening inside the British parliamentary premises, as “false assertions” in a “distinctly one-sided discussion.”

“We deeply regret that rather than a balanced debate, false assertions — without substantiation or facts — were made, casting aspersions on the largest functioning democracy in the world and its institutions,” the commission said in a statement after the Monday evening debate on an e-petition. The debate was held in response to an e-petition that had crossed the 100,000-signature threshold, required for it to be approved by the House of Commons Petitions Committee.

It lamented that a false narrative over farmers’ protest was sought to be developed even though “the High Commission of India has been, over a period of time, taking care to inform all concerned about the issues raised in the petition.

The Indian High Commission made its displeasure known despite the British government earlier reiterating that the three New Delhi laws on agricultural reform were a “domestic matter”. The British government also underlined India’s importance, saying “India and the UK together work as a force for good in the UN Security Council and bilateral cooperation between the two countries helps fix many global problems.”

Rebuts the fake narrative peddled in the UK Parliament

In its statement, the Indian Commission also pointed out that foreign media, including British media, had been present and witnessed the events surrounding the farmers’ protests in India first-hand and therefore any “question of lack of freedom of the media in India does not arise.” It lamented that a false narrative over farmers’ protest was sought to be developed even though “the High Commission of India has been, over a period of time, taking care to inform all concerned about the issues raised in the petition.”

Indian Foreign Secretary summons the British High Commissioner, conveys strong opposition to the “unwarranted and tendentious discussion on agricultural reforms in India in the British Parliament”.

The High Commission said it was compelled to react to the lawmakers’ debate due to the apprehensions cast on India. “The High Commission of India would normally refrain from commenting on an internal discussion involving a small group of Honourable Parliamentarians in a limited quorum,” the statement said.

“However, when aspersions are cast on India by anyone, irrespective of their claims of friendship and love for India or domestic political compulsions, there is a need to set the record straight,” it added.

The statement followed a group of around dozen cross-party British MPs debating issues around the alleged “use of force” against protesters opposed to agricultural reforms in India and journalists being targeted while covering the protests. As the British government Minister deputed to respond to the debate, Foreign, Commonwealth and Development Office (FCDO) Minister Nigel Adams said the close UK-India relationship did not hinder the UK in any way from raising difficult issues with India, even as he reiterated the government line that agricultural reforms are a “domestic matter” for India.

While the Minister acknowledged the “alarm and uncertainty” the farmers’ protests and their coverage in India had caused among British communities with family ties in India, he expressed hope that the ongoing dialogue between the Indian government and farmers’ unions will have positive results. 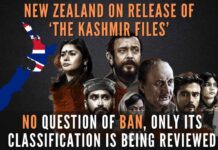