Petrol and Diesel will cost more

The latest increase follows a stiffer hike of Rs.3.07 a litre on petrol and Rs.1.90 a litre in diesel rates effected on March 17.

The Indian basket of crude oils, composed of 73 percent sour grade Dubai and Oman crudes and the rest by sweet grade UK Brent, closed trade on Friday at $36.58 a barrel of 159 litres as per official data, after having fallen to around $25 earlier in the year. 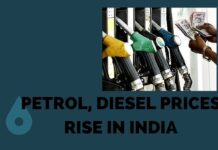 Of 21 Indian cities surveyed, only 6 are financially independent