Four wars, including one undeclared war beside many border skirmishes; Pakistan has an exceptional track record of losing wars to India. Pakistan is not only a brilliant example of political failure but also has an exemplary record of international humiliation for being the heaven for most wanted terrorists and acts of terrorism.

In more than 70 years long history of Indo-Pak conflict, Pakistan has always maintained it’s title. Title of being a consistent loser. During Indo-Pak war 1971, its forces in East Pakistan surrendered to India following which the People’s Republic of Bangladesh was created. And West Pakistan after historic defeat moved on as the Islamic Republic of Pakistan. During the war, Pakistan lost half its navy, a quarter of its air force with a third of its army.

After losing its major part in 1971, Pakistan finds it impossible to win against Indian forces on borders. So it leads Pakistan to shift its Anti-India agenda from a direct military based to indirect terrorist based along the Indo-Pak borders mainly along Indian state of Jammu & Kashmir.

After missing the taste of defeat for a long time Pakistani soldiers in 1999 disguised as Kashmiri militants infiltrated into positions on the Indian side of the Line of control. India launched “Operation Vijay” to regain its position. The operation was successful bringing victory to India in Kargil war. India regained its position exposing the felonious face of Pakistan. The then Prime Minister of Pakistan Mr. Nawaz Sharif said he was totally unaware of Pakistan infiltration until Indian Prime Minister warned him over the phone regarding the infiltration. Sharif’s statement proved international allegations against the internal political situation of Pakistan where three parallel government function at the same time – Elected Government, Army and ISI.

Currently, Pakistan’s elected Government seems has accepted the fact that the country can’t survive if another war erupted with Indian forces. Indian forces whose can land anytime in Pakistan territory to kill terrorists like they did in September,2016 to revenge the terrorist attacks at the IAF airbase at Pathankot.

Second parallel Government in Pakistan, Army still violating ceasefire across borders mainly targeting innocent civilians. Rogue army of Pakistan is internationally notorious for its cowardly flagrant violations of the honour code of soldiering and the provisions of the Geneva Convention.

Third parallel government in Pakistan, ISI has waged war against India through social media. While sitting in Pakistan territory, hundreds of its men and men behind women names, try to instigate every internal protest against Indian government to turn it into violent one. These rogue propagandists of Islamic Republic of Pakistan don’t want to accept the fact that Muslims of secular India no less patriotic than their fellow Hindus or Sikhs. Population of muslims in India are more than that of Pakistan and they never fight on Shia-sunni lines like those in Pakistan regularly do. Pakistan had banned Indian actor Feroz Khan when he in Pakistan spoke to his heart that India is better country for Muslims to live in and Muslims in India are progressive while Muslims in Pakistan are still of regressive mindset as due to its Islamic state nature.

ISI neither learning from its own past failures nor it ready to accept the cowardice its agents notorious for. ISI has Crown of fastest secret agency around the World whose agents fastest turning themselves from agents to double-agents, some agents deserve medals as they even took less than an year to double cross their parent organisation, ISI. CIA deserve special applaude to sense this exceptional quality of ISI’s agents. It recently faced huge humiliation when its unofficial Twitter handle @defencepk to propagate Anti-India agenda mainly based on religious lines, suspended by Twitter due to mass reporting from Indian users. Mass reporting by right-wing users along with their ideological rivals left-wing users against hate speech spread by the handle lead permanent Twitter suspension. Secret agencies of different countries already know what later normal citizens came to know that ISI is nothing more than a bunch of jokers. ISI which even can’t survive their Twitter handle, how would it protect the terrorist’s heaven, the Islamic Republic of Pakistan.

Current situation of Pakistan is of a 70 years old lady whose lost her charm, youth and capabilities to ruin the life of her neighbor, a very handsome, progressive and powerful man. The lady was in a long illicit relationship with a distant man who was providing her funds. Now the distant man has stopped her funds and exposed her secretive ill-motives. Now the distant man is a friend of the neighbor of the lady. The neighbor man who forgiver her sins and tried to befriend her everytime is now in no mood to tolerate any potential threat from the lady. The lady now day and night fear that she would meet the same fate of her only son, PNS Ghazi. 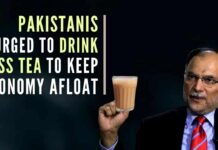 Taliban Takeover is a Diplomatic Failure