[dropcap color=”#008040″ boxed=”yes” boxed_radius=”8px” class=”” id=””]I[/dropcap]f 2015 ended with that hope that terror will no more be an extension of Islamabad’s diplomatic forays after Prime Minister Narendra Modi’s path-breacking visit to Lahore, and then the New Year has started on an ominous note. Pak-sponsored fidayeen launched a daring attack at the Indian Air Force Base in Punjab’s Pathankot on Saturday morning, signaling their determination to expand arc of terror from Jammu and Kashmir to Punjab and target strategic locations. Pathankot air base is barley 40 kms from the Pakistan border.
The four terrorists who were eliminated after a fierce battle in which three India Air force personnel also lost their lives, were armed with AK-47 assault rifles, rocket launches, global positioning systems and sophisticated communication devices—equipment they could not have procured without active connivance of either Pakistan army or Inter service Intelligence (ISI).
Two other terrorists are believed to be still out in the jungles and hills, and security forces were looking for them. Meanwhile, according to agency reports, fresh firing was reported from inside the IAF base where search for the fifth terrorist is underway. Loud explosion were also heard. At least four terrorists and three jawans were killed in the attack on Indian Air Force base in Pathankot on Saturday morning.
The terror design was ended without much damage because Punjab and all the security establishments and strategic locations were on high alert since Friday evening when the terrorists in army fatigue sneaked from across the Pakistan border into India and snatched the vehicles and mobile phone of Superintendent of Police of Gurudaspur. But the telephone intercept by the intelligence agencies gave away their plot. The intercept also showed that they had entered the India territory from Bahawalpur in Pakistan, and were tasked to destroy air force assets at the base. The terrorists are believed to have infiltrated into India 3 days ago.
The fact that terrorists came from Bahawalpur indicates the possibility that they were fidayeen recruits of Jaish-e-Mohammed, which operates from the region. The dreaded JEM chief Masood Azhar is stationed there.
[dropcap color=”#008040″ boxed=”yes” boxed_radius=”8px” class=”” id=””]T[/dropcap]he attack comes six months after the Gurudaspur terrorist strike when three terrorists opened fire in Dinanagar killing three civilians.
The gunfire started around 3.30 AM after the terrorists tried to sneak into the air base. One of them reportedly was shot dead when he tried to climb the wall of the high-security establishment.
Another terrorist also fell to the bullets of army jawans and two of his colleagues were confined to the non-technical area. The National Security Guard, additional army jawans and helicopters were deployed to contained the damage and eliminate the terrorists. However, two jawans of the IAF lost their lives in the operation and several others were injured. Following the warning, the National Security Advisor held an urgent meeting with senior officials late last night. The Air Chief and all concerned officers were also informed.
[dropcap color=”#008040″ boxed=”yes” boxed_radius=”8px” class=”” id=””]N[/dropcap]ational Security Advisor Ajit Doval had a telephonic conversation with his Pakistan counterpart about the terror attack. After the telephone intercepts, Doval held meeting with senior officials including Air Force Chief on late Friday night.
Delhi has also been put on alert on Saturday following the Pathankot incident. Security was heightened at the airport, railway stations, bus stands and other vital installations in the city. Vigil was also heightened in several areas, including popular market places, in South Delhi, Central Delhi and the VIP movement zone in Lutyen’s Delhi, a senior police official said. Special Police Commissioner (Law and Order) is taking stock of the situation. 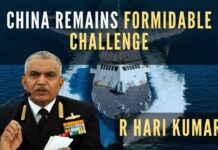 India nails Pakistan’s lies – underground tunnel discovered from where the...