A court in Dahanu today remanded 101 accused in connection with the April 16 murder of two Hindu Sadhus and their driver at Gadchinchale within the limits of Kasa police station in Dahanu Taluka, Palghar District to 14 days police custody. All of them have been arrested on April 17.

Police had arrested 110 people in the Gadchinchle murder case. As 9 of them are minors, they have been sent to Bhiwandi Juvenile Correctional Institution. The remaining 101 were produced in the first-instance court at Dahanu on April 18, 2020, were remanded in police custody till April 30. The court has remanded all the accused in police custody for the next 14 days. Today, on behalf of the relatives of the deceased, senior lawyer P. N. Ojha filed the writ petition on behalf of the relatives of the deceased. N. Ojha told the media that police had arrested 101 accused on April 18 on murder charges. As the 12-day police custody period, in that case, was coming to an end, the police today again sought 14 days police custody for investigation in another case filed in the same case and the court granted the demand. Police have registered a total of 3 cases in Gadchinchale case. A heavy police presence was maintained in Dahanu court premises today. Roads leading to the court were closed to traffic. Only police, lawyers and journalists were allowed into the area. Journalists were denied direct access to the court premises.

As of now only 1 accused have engaged a lawyer to represent him in the bail hearing. The Communist Naxal-Christian Missionaries fraudulent NGO are testing the waters on the long Legal battle and planning sinister nexus in the days ahead.

All attention is now focused at Maharashtra CM Uddhav Thackeray to order a Judicial inquiry or handing the probe over to the Central Bureau of Investigation (CBI).

Dr. Swamy to file a PIL

Dr Swamy had informed yesterday his intention to file a Public Interest Litigation (PIL) demanding CBI fair probe. With someone else filing PIL in the matter Dr. Swamy took to Twitter today to announce he will wait to see the outcome of the PIL to decide further.

Compensation is still not announced by Maharashtra Govt for the deceased. There is huge resentment among the masses Hindutva Nationalist forces on the non-commitment from both State and Central Government on the killing.

PM Modi is criticized for his silence on the killing of 3 people including 2 Hindu Sadhus. Normally he takes to Twitter to show his vigilante what’s happening in the whole country. Social Media is abuzz with core Hindutva supporters expressing their anger on PM Modi for his long silence. At least expected was condemning of the incident and offering his condolence.

In the meantime relief to the Driver’s family is pouring in from all sides with the NRI Film fraternity individuals Trust Foundation pledging to support and help the innocent Drivers family who was killed in the incident. 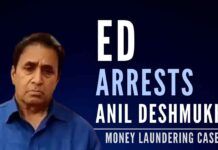