[dropcap color=”#008040″ boxed=”yes” boxed_radius=”8px” class=”” id=””]P[/dropcap]etrol and other petroleum products would not be brought under the ambit of the proposed new indirect tax regime – the pan-India goods and services tax (GST) – for some time after its implementation, Chief Economic Advisor (CEA) Arvind Subramaniam said on Sunday.

“Constitutionally petrol and other petroleum products will be within the GST system. But it would be out of the GST dispensation after its implementation for some time,” he told reporters on the sidelines of an event here.

“Even after GST is rolled out, petrol and other petroleum products would continue to be taxed in the present way both by the centre and states.”

On a timeline for the roll-out of GST, Subramaniam said that Finance Minister Arun Jaitley had said that the government was hoping the GST Bill would be passed soon.

“All depends on when the constitution amendment bill gets cleared,” he said.

[dropcap color=”#008040″ boxed=”yes” boxed_radius=”8px” class=”” id=””]T[/dropcap]he government said earlier this week that it is unable to predict a timeline for the passage of the GST Bill, currently stalled in the Rajya Sabha because the ruling NDA does not have the required numbers in the upper house of parliament. It was passed by the Lok Sabha in May.

Jaitley on Sunday again blamed the Congress for delaying passage of the GST Bill, and said parliament would have to find alternate ways of approving legislation if the opposition party continued on its obstructionist mode. 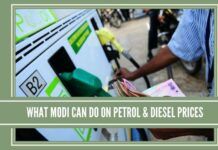 What Modi Can Do On Petrol & Diesel Prices