The demands made by various parties including the DMK smell of a ploy to create much ado about nothing.

Is the Pollachi Sex Scandal which the media claim has rocked Tamil Nadu politics an attempt by the DMK-led opposition to put the ruling AIADMK in an embarrassing position? The demands made by various parties including the DMK smell of a ploy to create much ado about nothing.

By the time the DMK’s woman leader held the demonstration in Pollachi, Tamil Nadu Police had arrested the four youths accused in the incident.

The controversy involves a group of persons including a local leader of the AIADMK who had filmed various girls and women in compromising positions and used the clippings to extort money and sexual favours from the victims. The social media is galore with reports about the porno and steamy video clippings of such sexual exploits perpetrated by the criminals. If reports appearing in a section of the media are to be believed hundreds of girls have fallen victims to the evil designs of these criminals. M K Stalin, leader of the DMK, went a step further and alleged that more than 200 girls from Pollachi have been subjected to this torture.

Kanimozhi, daughter of late M Karunanidhi, rushed to Pollachi and held a roadblock demanding the arrest of all the accused in the case. By the time the DMK’s woman leader held the demonstration in Pollachi, Tamil Nadu Police had arrested the four youth accused in the incident. This included Thirunavakarassar, the AIADMK local leader who has been removed from the party with immediate effect.

One of the victims was bold enough to come out and file a complaint with the police. But what happened after police filed the complaint shocked the State. Her name and address were flashed by a section of the media and her brother was bashed up by a gang owing allegiance to the arrested Thirunavakasarrasar.

Certain allegations by the victim smack of a case being built making use of the strict laws for prevention of cruelty against women.  An article on the issue posted in The Wire,[1] a news portal says that “she received a call from one Sabarirajan, alias Riswandh, whom she knew. Sabarirajan called her over for lunch at Unjavelampatti area of Pollachi but when she got there, he allegedly asked her to accompany him in a car. The survivor has alleged that the three other accused — Thirunavukkarasu, Vasanthakumar, and Satish — were already in the car.

Her account states that she trusted Sabarirajan and entered the car but the men drove her to a secluded place near Kalpana mills in Pollachi, where Satish forcibly removed her clothes while the other three filmed the act. They allegedly threatened her, extorted her and ordered her to submit to their “desires”, which she flatly refused. At this time, they snatched her gold chain and abandoned her, before driving off.

The accused then allegedly called the woman over the next few days demanding money by blackmailing that they would release the video. Unable to bear the torture, the survivor finally informed her parents who helped her file a police complaint.”

The charge by Stalin that more than 200 women have been sexually assaulted by the predators is a serious one. The DMK leader who claims to know the victims should encourage them to come forward and file the complaints.

The fact that Pollachi is an AIADMK stronghold has made Stalin and Kanimozhi to take the battle to the doors of Chief Minister Edappadi Palaniswamy. Stalin’s accusation that more than 200 girls have fallen victims to the sex scandal and blackmailing has been done with ulterior motives. Its Pollachi and the DMK has no base in the Kongunadu belt. It is the future of the girls hailing from Pollachi which is at stake and the vulture inside the DMK president smelled blood in the region and thus came the controversial and objectionable comment from him.

The Tamil Government handed over the case to Crime  Branch unit and within hours the government, by a special order transferred the case to the Central Bureau of Investigation (CBI). In spite of all these developments, the DMK and the Opposition parties dragged the name of Pollachi Jayaraman, deputy speaker and leader of the AIADMK in the case. Nothing surprising in it as Jayaraman is known for his atrocious and arrogant behaviour. The fact that the name of his son was associated with the accidental death of a  girl too came in handy for the DMK. [2]

The course of action would be to allow the CBI to probe the case and bring in accused before the law. An intelligence officer monitoring the case is of the view that he could spot many lacunae in the allegations by the victim. “It is possible that she faced sexual assault in the hands of the youth. But the question that remains unanswered is that why did she accompany the “Romeos” when they solicited her to join them for a trip to a secluded and unknown place,” said the official.

What encourages the opposition parties is the fact that they can make any number of allegations at this juncture to corner the AIADMK. “The charge by Stalin that more than 200 women have been sexually assaulted by the predators is a serious one. The DMK leader who claims to know the victims should encourage them to come forward and file the complaints,” said a senior police officer in Chennai.

The DMK is not that “poor” in cases of harassing and tormenting women. Recently there was a report of a DMK  councillor physically assaulting a beauty parlour staff and the video went viral. Being a close accomplice of party leader M K Stalin, helped Selvakumar to escape from any disciplinary action. He continues roaming around freely in Perambalur town like a temple bull exploiting women and girls of his choice[3].

The CPI-M is another party in the forefront fighting for fair treatment of women. The less said about the sexual escapades of the CPI-M and SFI leaders in neighboring Kerala, the better. Under the reign of  Pinarayi Vijayan, women in the age group of 15-70 are not safe in Kerala [4]. Even MLAs and party councillors are known for their skills and prowess in making women their eternal victims by physical, mental and societal pressures. [5][6]

The coming together of parties like the PMK, DMDK and the BJP under the leadership of the AIADMK to take on the DMK-led mega front in Tamil Nadu has rattled the Karunanidhi family. Though the DMK had initial advantages in the run-up to the poll, thanks to loyal media persons like N Ram, R R Gopal, Peer Mohammed, B Kolappan (The Hindu) and Haseef, the AIADMK is slowly narrowing the wide gap that existed between it and the Karunanidhi family controlled  DMK. The election is not going to be a walkover for the DMK, the focus of the party’s attack being Sanatana Dharma and the threat posed by it to India! 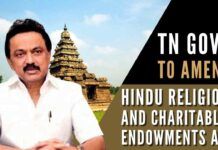